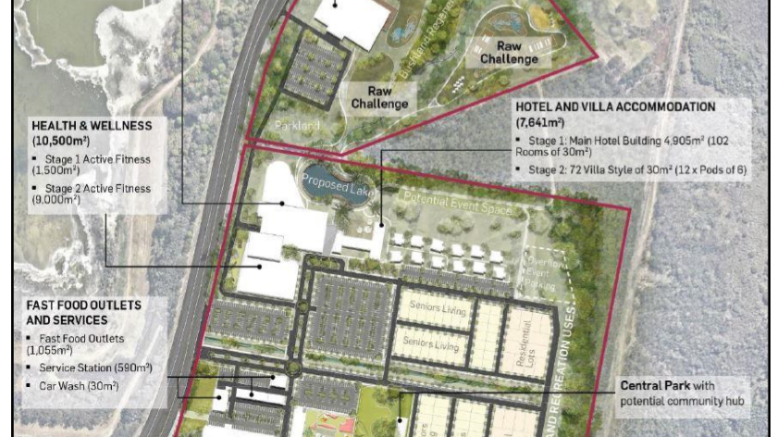 Indicative concept plan of the redevelopment of 45ha at Doyalson

Doylo Lifestyle Group has passed its first hurdle for a major housing and recreation redevelopment to be staged over 20 years on 45ha at Doyalson.

At its April 27 meeting, Central Coast Council voted unanimously to rezone land for low density housing and to forward a proposal to the NSW Planning Minister for determination.

The intended outcome of the proposal is to allow for the relocation and expansion of Doyalson-Wyee RSL Club and gym, rezoning and subdivision for about 140 low density residences and 220 manufactured homes in a seniors village, medical facilities, childcare centre, service station, food outlets, motel/hotel accommodation, recreation facilities including indoor sports centre, go cart track, paintball and expansion of the Raw Challenge course.

Doylo Lifestyle Group CEO, Darren Thornton, said that they wanted to start construction as soon as possible after approval from the Minister.

“One of the greatest things about this development is the jobs for the community, and it’s going to be a destination hub on the northern end of the coast,” he said.

“The first stage will be traffic lights at a new intersection where Raw Challenge is now, and the childcare and medical centre, fast food outlets and garage which will be on one side of the intersection,” Thornton said.

Doyalson Wyee RSL Club will be relocated to the northern side of the new intersection.

Thornton said the recreation hub, including expansion and relocation of Raw Challenge, would be the second stage and the residential component and seniors’ living village would be the final stage to be developed.

There are no plans for sports grounds in the redevelopment and clubs such as Doyalson Dragons Touch Football Association, Northern Lakes Warriors rugby league, Doyalson Wolves Soccer Club and Doyalson cricket team are all looking for new home grounds.

Thornton said already there had been positive moves to relocate these clubs.

Doylo Lifestyle Group, which owns and manages the sporting fields, has started consultation with the clubs to help find other suitable replacement fields and has committed to completion of their relocation prior to starting redevelopment.

Councillor Chris Holstein wants Council to accept the club’s offer of entering into a planning agreement with Council that ensured there would be no commencement until suitable alternative grounds and facilities had been found for all the sporting associations currently using the site.

“They offered this and they made it quite clear,” he said.

“This is a site used by teams from all over the Central Coast, so it is important that land for sport is not lost.”

Deputy Mayor, Jane Smith, supported the proposal but mentioned mine subsidence, contaminated lands and the ash dam from Vales Point power station across the road, all of which, she said, would need further investigation.

“Because of these complexities, we want to make sure that we get it right if we are going

to encourage residential development, so two levels of scrutiny, by Council and the State Government, would assist, so that in 20 years’ time there are no unforeseen problems,” she said.

Thornton said there had been a lot of restrictions because of mine subsidence, but they had been overcome, and Subsidence Advisory NSW said the project could proceed, with certain regulations.

“That has been one of our biggest hurdles,” he said.

A biodiversity strategy has been developed to preserve and protect vegetation on site and will be reviewed by the Department of Environment.

A council report said that based on the indicative concept plan, about 9ha of land would be cleared with 10.9ha to be retained and revegetated.

There will be 4.3ha of native revegetation within the proposed 15m to 65m biodiversity corridors.

Council says the planning proposal would result in a positive social outcome for increased housing in the northern part of the Coast, while exceeding employment targets proposed in the North Wyong Shire Structure Plan, and that it would increase the availability of health and childcare services.

“We are putting down foundations now, and it’s another good economic driver for the north, which desperately needs those jobs,” Cr Greg Best said.

According to Council, the proposal is generally consistent with the applicable State Environmental Planning Policies and relevant guidelines set out within the regional and local plans, including the Central Coast Regional Plan.

Council will now develop a planning proposal which will go to the NSW Planning Minister, who decides whether it can proceed and on what conditions.

When those conditions are met, and the proposal changed if necessary, the proposal will be publicly exhibited for submissions.