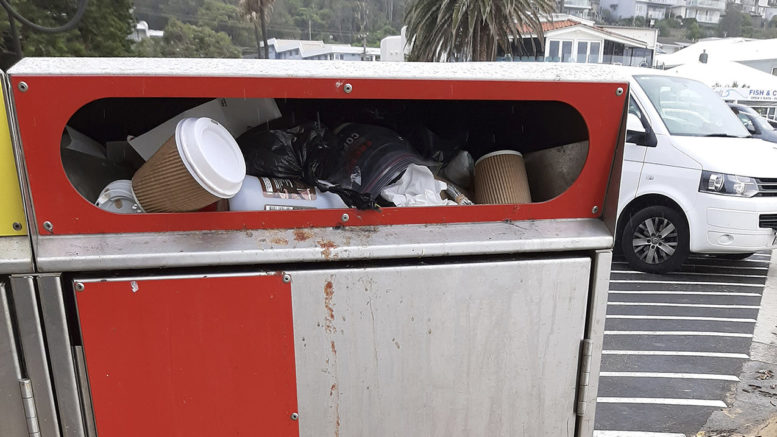 With its draft Waste Resource Management Strategy available for final public review until June 21, Central Coast Council has come under fire for not effectively managing the collection of rubbish from its own bins in public spaces.

Environmentalist Anthony Horwood of Terrigal said there were ongoing waste management issues associated with Council bins on the foreshore at South Avoca Beach and other bins around the region.

“Unfortunately (for three Mondays) in a row that I have noticed waste spilling out on to the pavement from grossly overfull bins (at South Avoca), and on each occasion a significant amount has made its way to the stormwater system,” Horwood said.

“Some (is) trapped by the large holed grid above and some below in the stormwater drain.

“Those two adages ‘what drops on the ground all flows to the sea’ and ‘out of sight out of mind’ ring in my ears.

“Surely we have gone beyond the point of ignoring ocean pollution, or worse just accepting that it occurs and not dealing with it.”

Horwood said he had noticed the problem at other locations including Terrigal, Avoca and Toowoon beaches since COVID-19 social restrictions were relaxed.

“What I think is happening is that there are a lot of people gathering at their local cafes and getting a coffee which of course are now pretty much confined to takeaway cups,” he said.

“That means a lot more rubbish being generated and then rubbish bins are overflowing, which is ending up on the ground and then in storm-water drains and out to sea.

“I just don’t think Council has recognised this issue or reacted to it yet.”

Horwood has emailed councillors asking them to intercede in a direction to the operational arm of Council to deal with the issue.