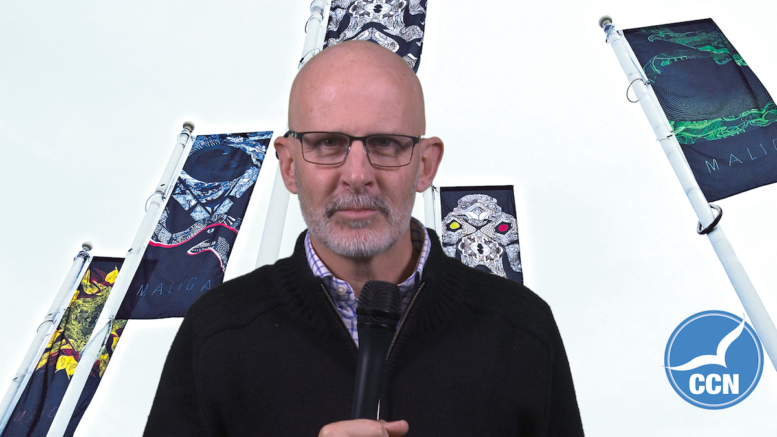 Its national reconciliation week this week and, to acknowledge the anniversary of Sorry Day 2008, Central Coast Council will be displaying indigenous flags and artwork and Central Coast Newspapers would like to pay our respects to all the first peoples of the Coast, and their elders past and present.

The SES conducted a sand bagging operation in Davistown to avert even more severe flooding and Gosford Unit Deputy Commander, Werner Klumpp, said they were many reports of tidal flooding around the lower end of Erina and Narara Creeks.

On Sunday, the Bureau of Meteorology recorded average wind speeds of up to 85kmh with peak gusts of over 100kmh.

The Entrance seemed to cop the brunt of the storm surge with seas swirling up and over the sea wall and lifting huge concrete slabs along the Memorial Park foreshore walkway.

And the wild seas also brought another surprise to the people of Birdie Beach who woke on Monday morning to find five 40-feet shipping containers on their beach.

The containers were reported to contain packets of surgical masks and other medical supplies, many of which have also been discovered along the Coast’s beaches.

The culprit is believed to be the cargo ship, APL England, which lost 40 containers overboard off Cronulla with another 74 other containers damaged on deck.

And AMSA have advised that debris could continue to wash-up over the coming days.

After weeks of dodging questions on the issue, Premier Gladys Berejiklian has announced a 12 month wage freeze for public servants, with unions representing teachers and nurses already railing at the decision.

Thanks Ross. Yes, the Member for Gosford Liesl Tesch joined a throng of local nurses and midwives on the Gosford waterfront Wednesday morning to protest the wage freeze, which means a legislated 2.5% pay rise from 1 may now not be happening.

The decision will also affect teachers, police and firefighters.

I asked members of the Nurses and Midwives Association Meg Pendrick and Michelle Cashman what they thought of it.

And Liesl Tesch said she would be raising the issue in State Parliament next week.

And while we’re on the State Government, Premier Berejiklian announced a further relaxation of Covid-19 restrictions this week to allow pubs, clubs, cafes and restaurants to have up to 50 customers.

She also announced the ban on holiday travel would be lifted from Monday, June 1.

Regional Director for Business NSW on the Central Coast, Paula Martin, said the Coast has roughly 24,000 people not working, half of which currently are on JobKeeper, and more than half are in the tourism/accommodation, hospitality and retail industries all of which are set to benefit from the lifting of restrictions.

So let’s hope that provides a much needed boost to local business.

In anticipation of the Tourism Central Coast is gearing up to reboot its ‘Have A Little Adventure’ campaign promoting the Coast – here’s a little snippet of their pitch.

And finally Ross, the M1 roadworks between Kariong and Somersby have been completed and, as you can see here, traffic was moving smoothly this week.

The NSW and Federal Government celebrating this milestone on Thursday and we spoke briefly to the Coast’s Parliamentary Secretary, Adam Crouch.

Many Covid-19 restrictions are still in place but that hasn’t prevented two big events looming large on the Coast Diary in coming weeks.

The first of these is Coast Opera Australia’s Disney to Diva. After its successful Anzac Day performance, Coast Opera will once again take over Central Coast Stadium from 4pm on Saturday, June 7 for its production of Disney to Diva.

And, in an exciting twist, the trio will also be joined by talented, local 12 year old, Maggie Smith, a dance student at GCS Dance studios.

Here’s a glimpse of Angela from the Anzac Day concert.

And another event not to be missed is the very popular annual Harvest Festival.

While locals and visitors may not be physically heading to the Coast’s hinterland on the June long-weekend they can still participate in the event online via four video packages – Taste of Harvest, Paddock to Plate, Embrace the Adventure and Farmers’ Story – this will allow viewers to learn how to cook with local produce, discover hidden waterfalls and seasonal fruits and get to know some of the region’s farmers as they take show you around their properties, virtually.

In sport, the NZ Warriors stepped up to full contact this week ahead of this Saturday night’s clash with the Dragons at Central Coast Stadium.

Both teams have 2 losses from their first two games and so we can expect a bit of desperation, according to Warriors Coach, Steve Kearney.

And Mayor Lisa Matthews was at training on Thursday to formally welcome Kearney and the Warriors to the Coast.

And we leave you this week with local film-maker, Dean Russell who was inspired by the legendary band Queen to adapt their hit song Bohemian Rhapsody to meet Covid-19 shutdown restrictions.

Coast Community News Issue No. 244 was out, hot off the press this morning – and you can also read the news from all around the Coast on our website.

Outreach Programs at TAFE to close