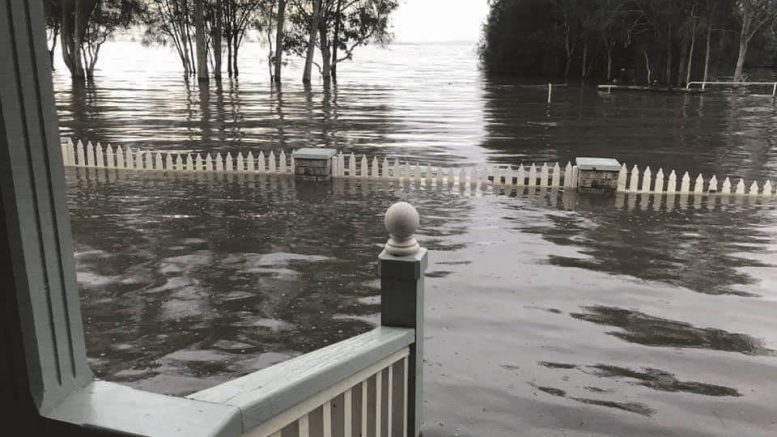 The NSW Government got it wrong when it classified the February flooding of Tuggerah lakes as “minor” according to The Entrance MP, David Mehan.

Mehan is calling for a complete review of the local flood classification and warning system.

He cites the warning by NSW State Emergency Services (SES) at 10.48pm on Saturday, February 8.

“The minor flood level for the lakes, according to NSW SES, was 0.90m, and the warning predicted that this level would be reached on Sunday (May 9),” Mehan said.

“No further warnings about flood height were issued.

“Waters reached the predicted level on that Sunday and continued to rise, eventually peaking on Tuesday, February 11, at 1.673m before falling after Central Coast Council excavated an additional channel through the sand berm at The Entrance Channel.

“Many people around the lake at Berkeley Vale, Killarney Vale, Long Jetty, The Entrance and North Entrance saw their homes and property inundated, some above floor level, and many roads were affected.”

Yet, Mehan said, this level of impact was classified as a “moderate flood” under the guidelines in the NSW SES Provision and Requirements for Flood Warning in NSW.

“Terrence Schofield of North Entrance woke on Tuesday morning to find his mobility scooter covered by flood water and rendered useless,” he said.

“Its replacement cost him $4,390, but with better warning, he would have been able to move it a short distance out of reach of flood waters.”

Mehan said that in the aftermath, many in the community expressed concerns about the severity of the flood and whether this could have been managed better.

He has called for an urgent review of the flood classifications applied to Tuggerah lakes and a new approach to flood management, including a better warning system, active berm management at the channel to ensure escape of flood waters, and a campaign of community education and preparedness to improve flood response.

“The deadline for review of the Wyong Shire Local Flood Plan was 2018, and this should now occur as a matter of urgency,” Mehan said.

“Had the existing Local Plan classification been used, the February flood warning would have been for a moderate flood as opposed to minor flood.

“The NSW SES guidelines don’t make sense, as many homes around Tuggerah lakes have minimum floor heights (the level for a moderate flood) below the level of the February flood.

“Neither the Local Plan nor the NSW SES warning guidelines make formal provision for local warnings to be issued.

“Bureau of Meteorology flood warnings are broadcast by NSW SES, which are then communicated locally in an informal way via social media and local media.

“I have no criticism of local SES personnel as they responded efficiently and diligently during the February flood, however, they have been let down by an out-of-date plan and suspect flood classification for the region which is the responsibility of the NSW SES and the State Government to fix.”

In relation to The Entrance Channel, Mehan noted that the former Wyong Council’s Tuggerah Lakes Floodplain Risk Management Study and Plan of November, 2014, had recommended a formalised “Entrance Management Strategy to Manage Flooding”.

“The benefits of active berm management of the channel need to be formalised following the positive results achieved by using excavators to clear the sand berm during the February flood,” he said.

“The Wyong Shire Local Plan, which is overdue for review, contains no provisions for opening of the channel in the event the sand berm across the channel mouth impedes escape of flood waters, as occurred in the February flood.

“The Local Plan includes a requirement for community education about flood risk and preparation, and this has not happened.

“The State Emergency Services Minister was on holiday during the bush fires, he was silent during the February flood, and he has failed to adequately resource our local SES.”