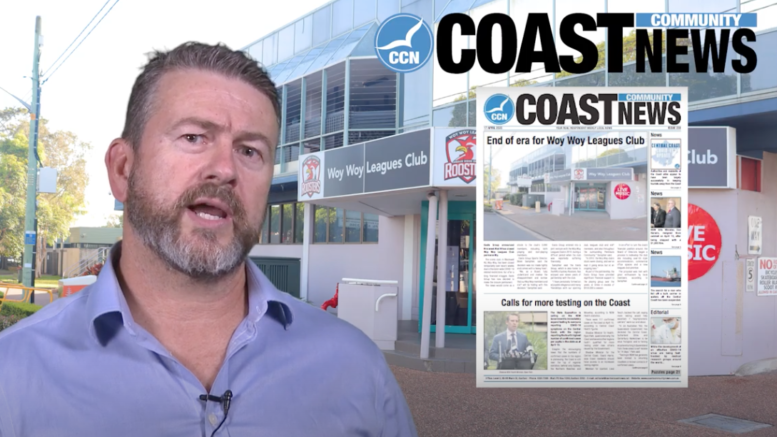 The Australian Maritime Safety Authority has confirmed that the search for a man lost overboard from the bulk carrier, MV Western Marine, has been suspended.

The search for the man, a Korean national, was conducted for most of Wednesday over an area of 130 square kms off the Coast at Berkeley Vale. The ship has now docked in Newcastle port.

And in big news this week, East groups, the owner of the Sydney Roosters, has announced that the Woy Woy Leagues Club will close its doors permanently.

The club was temporarily closed due to the COVID-19 restrictions, but the Easts Group confirmed earlier this week the closure would be made permanent.

Easts Sports Director, Brien Samphier said it was with a very heavy heart the group made the decision.

He said the club had struggled financially since it formed a joint venture with the Easts Group in 2012 and that a proposal by the group to develop the site was rejected by the State Government independent planning panel.

Samphier said Easts was committed to helping its near-4000 members find a new home on the Peninsula.

The Easts group have also been a key financial sponsor for the Woy Woy rugby league playing groups and Samphier said they had committed to a grant of $20,000 a year for the development of junior rugby over the next three years.

Authorities appear to have been largely successful in slowing the spread of COVID-19 on the Central Coast.

Earlier this week, Local District health confirmed that the number of confirmed cases was a total of 81 people that have now recovered

Notwithstanding the slowdown in new infections, the NSW Shadow Minister for Health, Ryan Park, has called on the NSW Government to expand testing for COVID-19 on the Central Coast.

Ryan Park said the Central Coast, which has the fourth highest concentration of confirmed cases in NSW had been labelled a virus ‘hotspots’ by the Queensland government who were therefore forcing anyone returning from the Central Coast to self-isolate for 14 days.

Terrigal MP Adam Crouch weighed into the discussion this week saying criteria for testing had been relaxed to allow more people to be tested at their discretion.

Now, we were down on the peninsula this week and spoke with several local businesses about the current environment.

We asked Chris Perkins, who runs Helado Café, specifically about the JobKeeper package and this is what he had to say

We also spoke with Robert Hook, who runs Premium Apartment Holiday rentals in Ettalong about how tourism is being impacted by the restrictions.

And finally Ross, we caught up with well-known Narara horse-trainer Angela Davies, the very proud trainer of Through the Cracks who won the prestigious $400,000 Provincial Championship at Randwick over the Easter weekend.

And among the owners who shared in the winnings were several locals including a restaurant owner, a baker and a sparkie.

And that was David Abrahams, our resident technology-come-driftwood expert doubling up this week as our resident horseracing expert.

Thanks for watching. Don’t forget coast Community News Issue 238 was out this morning with all the latest in news and events around the Coast.

And finally, for something a little quirky, we wanted to introduce you to Central Coast musicians and sisters, Mia, Abbey and Jaymi Toole, aka Little Quirks Band.

The trio have toured the country and have supported some big names in music, but have more recently joined the Isol-Aid Festival scene for their first crack at livestream festival music.

Presented by Ross Barry with David Abrahams, filming and production by Alex Herget in Gosford, April 17, 2020.

New Plan of Management for Bouddi