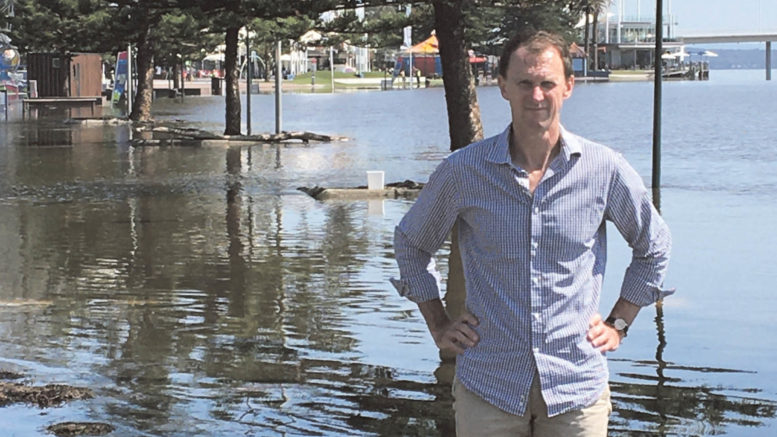 David Mehan at floodwaters at The Entrance

The Entrance MP, David Mehan, said he does not resile from his criticism of Central Coast Council and its management of The Entrance Channel.
“The statement issued by Council on February 21 supports my criticism and I am pleased that Council has acknowledged its mistakes around the decision to excavate an additional channel opening to relieve flood pressure,” he said.
Mehan said that the Motion that went before Council of no confidence in the Mayor was simple political opportunism by a couple of councillors with an eye to the September election, rather than the welfare of the Central Coast.
“Decisions about the channel were taken by Council and not the Mayor, Lisa Matthews, and accordingly, criticism of the Mayor over this issue should now end.”
Mehan said Council must change the way it managed The Entrance Channel.
“The channel is a dynamic environment that requires active management to minimise flood risk and maintain the health of the lake,” he said.
“Council has, instead, adopted a failed passive approach of reduced dredging and the hope that mother nature will clear the channel in time of flood.
“In the past, dredging happened annuall.
“Council and its elected representatives are now on notice that they must adopt a new approach to the management of the channel.
“This should be the urgent business of the next Council meeting.”
He spoke on the subject in State Parliament on February 25, saying that his concerns about flood risk were first raised with the Environment Minister in February, 2019, when the dredging of the channel had been stopped by order of the Environment Protection Authority (EPA).
“The Minister advised that notwithstanding the EPA prevention notice, Council could continue to dredge in accordance with its licence,” Mehan said.
“Council owns its own dredge and dredging had been an annual activity but over time that stretched to where the interval between dredging was three or four years.
“In December, 2018, I was advised by Council that dredging had concluded for the year and that the dredge would be returned to Wyong River and removed to have repairs.
“It is a big concern that Council now says repairs cannot be undertaken, the dredge will be decommissioned and it has no plans for a new dredge.”
Mehan said he wrote to the Water Minister, Melinda Pavey, in January, urging her to review flood risk around the lakes and asked that Council be contacted to minimise risk.
“There was no response,” he said, “and nor was there response from Council when all Labor members wrote to the CEO on February 5 to impress on Council the seriousness of the matter.”