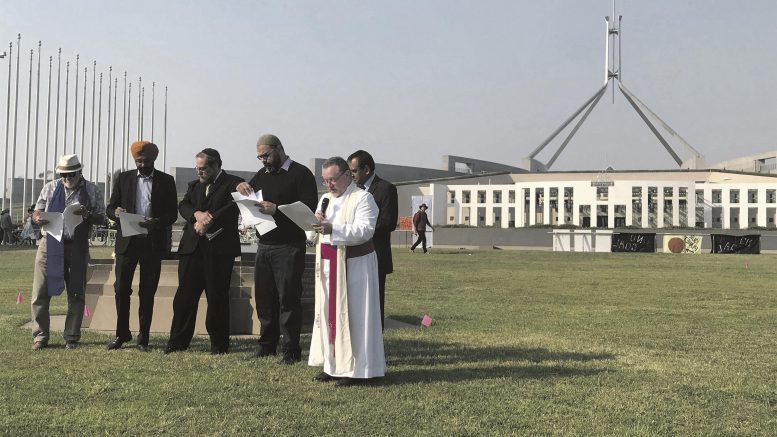 Fr Rod Bower with other religious leaders at Parliament House

Also in attendance at the People’s Climate Assembly in the grounds of Parliament House on February 4 was Gosford Anglican priest, Fr Rod Bower, who joined Buddhists, Anglicans, Catholics, Quakers and people of other faiths as part of The Australian Religious Response to Climate Change (ARRCC), which co-hosted the gathering.

ARRCC supporters made a meditation tent available and a number of faith leaders participated in a peaceful, silent encirclement of Parliament House.
Earlier in the day, Bower helped lead an Interfaith Mourning Ritual for bushfire victims, organised by the Canberra Interfaith Forum and the Australian Centre for Christianity and Culture.
“A religious response to climate change is essential for a healthy spirituality,” Bower said.
“It’s an expression of our connection with God, with each other and with the earth.

“Our responsibility to care for the earth is something that is common to all the faiths.”
Buddhist Gillian Reffell, who is Secretary of ARRCC, was part of a panel of faith speakers the preceding day which included Bower and Catholic Brigidine Sister, Jane Keogh.
“With the wake-up call that has been the bushfire crisis, we ask that the Government be guided by those experts who are offering pathways to a prosperous and sustainable future which does not depend on fossil fuels,” Reffell said.

“Australia is very vulnerable to global warming and it would be in the interests of country people, our children, Australia’s Pacific neighbours and the world if we finally begin to embrace the new, clean technologies of the future.”

Keogh spoke about the need to reach out to the “unconvinced”.
“People are good at heart, but they don’t understand the facts,” she said.
“Right now, as long as they think that you do respect them, they might be more interested in talking about the issues.
“Talk about how the climate issue has affected you personally and what you’re doing about it,.then listen and be respectful.”

The People’s Climate Assembly is hosting five days of events this week, involving a coalition of more than 20 community organisations, including School Strike for Climate, Stop Adani, Maritime Workers Union, Aboriginal Elders, Extinction Rebellion, ARRCC and Doctors for the Environment.