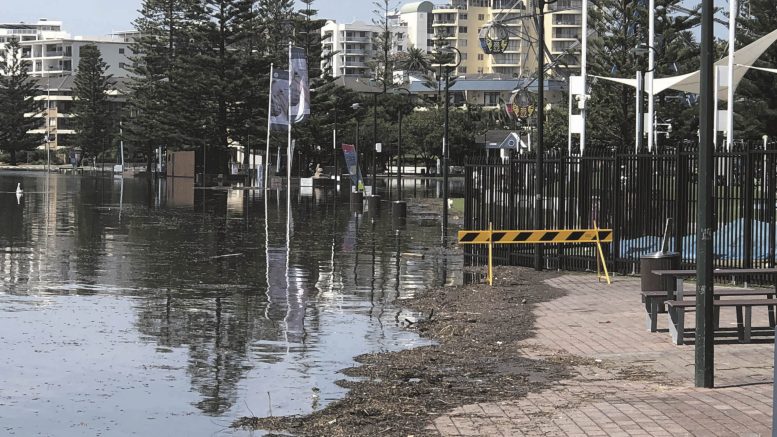 Floodwaters into the carnival area at The Entrance

The State Government will provide $ 600,000 for dredging of The Entrance Channel.

Parliamentary Secretary for the Central Coast, Adam Crouch, said the funding would be required to be matched dollar-for-dollar by Central Council.

“This would allow for a $1.2M dredging project at The Entrance”, he said.
“The NSW Government is still waiting confirmation from Council that it would commit to this,” Crouch said.
“The project will see about 60,000 cubic metres of sand dredged from The Entrance Channel and placed on nearby beaches.

“This week’s flooding shows that proper maintenance of the channel is absolutely essential for the safety of hundreds of homeowners.”
Crouch said the NSW Government was disappointed that Council’s inaction over the past 18 months had led to this crisis point.

“Today I am renewing my calls for Council to develop and implement a long term management plan for this local waterway,” he said.
Central Coast Mayor Lisa Matthews said it was great to see the long awaited funding from the State Government, after applying for the $600,000 grant in June, 2019, under the Rescuing Our Waterways Program.
“Council will match that amount and now we can get on with the dredging program,” she said.

“We have always been committed to a dredging program for the channel and have been carrying it out for more than 20 years.
“The missing part recently has been State Government funding.
“Dredging is the short term solution to the issues facing The Entrance Channel, we need now to plan and act for the long term.”
Council will draw on previous studies conducted into the 2013 and 2015 to help guide the work.

“Finding the best solution is a difficult and complex challenge and we are committed to getting it right,” the Mayor said.
“That requires us to look at the studies that have been conducted into the area, and to also seek funding support from other levels of government.”
The Mayor said she would now write to Environment Minister, Matt Kean, about the status of the expert committee which was promised in the 2019 State Government election.
The committee was to consider ways to improve water quality and flow in Tuggerah lakes.