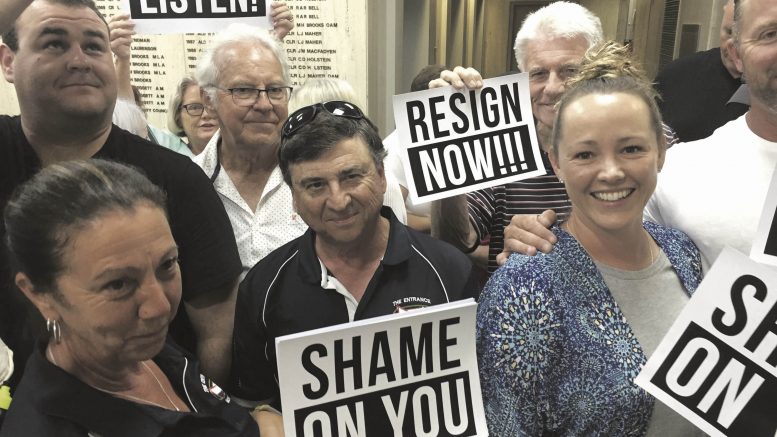 Central Coast Mayor, Lisa Matthews, is weathering a storm of her own with calls for her to resign.

A community campaign brewing on social media to start a legal class action against Council to compensate for damage caused to properties during the flooding of Tuggerah Lakes, which started on February 8.

Councillors Bruce McLachlan and Greg Best have issued a Notice of Motion to be heard at the February 24 meeting, calling for the Mayor’s resignation.
They say there is an “unprecedented collapse in community confidence in council, resulting in widespread calls for the mayor’s resignation”.

The Motion says “in the spirit of acknowledging the community outrage” that Council supports the community’s call for the mayor to stand down.
Mayor Matthews and, indeed, Central Coast Council as a whole, has copped a fierce community backlash over the delay in excavating The Entrance Channel to release banked-up floodwaters around the Tuggerah Lakes system.

The Mayor said on a radio program that she called upon the CEO, Gary Murphy, on Sunday, February 8, “to come up with a solution”.
“So, the staff actually did start the process of getting permission, you’ve got to remember the lakes are not our (Council’s) lakes, we don’t own it, therefore, we couldn’t just go and start digging without permission,” she said.

“Staff started asking for permission on Monday, February 10, and then had to make sure it was safe, and a low tide, before we started to dig,” the Mayor said.

The statement said Council was advised at 9.25am on Tuesday, February 11, that it could consider using emergency powers under the Local Government Act for the widening, or do it under the Council’s existing licence. “The Council advised at 12.09pm on Tuesday, February 11, that it intended to use emergency powers to widen the lake opening,” the statement said.

The Mayor announced on Tuesday afternoon that works were underway at The Entrance Channel at the Karagi sand spit to remove sand from the northern side of the existing channel and to attempt to redirect some of the flow from the existing channel further to the north.
“These works are to support realignment of the channel back to the northern side of the rock shelf and to help protect public infrastructure at The Entrance,” she said.

Mayor Matthews said that particular day was the best opportunity to conduct an operation of this nature because of the abating swell conditions.
However, the angry public consensus expressed on social media was “too little, too late”, because widespread flooding around the lakes had already occurred when Tuggerah Lakes had peaked at the minor flood level of 1.67m on Monday, exacerbated by abnormally high tides.

Just a few months ago owners of The Entrance Boatshed, Toni and Terry Moon, were urgently calling on Council to dredge the channel because the boatshed was almost high and dry because of the sand siltation and lack of water flow.

In an ironic turn of events, the boatshed became submerged in floodwaters because the deluge of rain had nowhere to escape because of the silted channel.

On Saturday, February 8, a large group of people turned up on The Entrance Beach and started shoveling a channel, hoping it would release some of the floodwaters that were creeping up to the floorboards of their homes around the lake’s edge.

Ben Weber from Chittaway Point arrived with his excavator “to help out all the local legends with shovels trying to unblock our disgraceful lake system”.
“Today shows what the Aussie spirit is all about with over 200 people helping in the pouring rain,” he said.
“I think I’m right in saying that everyone of us locals are fed up with the state of our waterways and want something down now.
“Now I’m in a fair bit of strife for trying to help out with my machinery and the Council rangers are after me.”

The Entrance Ward Councillor, Jilly Pilon, said “over the weekend (February 8 and 9) we saw first hand how decisions in Council have failed our community with properties and businesses being inundated”.
NSW Water Minister, Melinda Pavey, visited the flooded areas this week and held a press conference at The Entrance on Tuesday, February 18.
She said: “This Council had the authority, the ability, the licence was there to dredge and ensure that the channel was opened in a way to avoid many of the problems we had”.

Pavey announced $600,000 funding and Council has agreed to match that funding.
“We will get a dredging program here to ensure that the entrance stays open in a proper way,” she said.
According to the State Government’s NSW Coastal Dredging Strategy 2019-2024, The Entrance Channel is considered a local waterway and therefore a responsibility of local government.
Cr Pilon said that when she was a candidate in last year’s federal election, she secured $4.7M from the government for Council to assist with Tuggerah lakes.
“At that time, I asked Council directors what would be the best use of this funding, whether to buy our own dredge, lease a dredge, and what actually needed to be done?

“They said at that time that there were issues with the EPA and Fisheries so didn’t want it to go towards the dredging, so it was to go to the Tuggerah Lakes Estuary Management Plan.
“For over two years, I’ve been begging Council, alongside Crs McLachlan Best, to assist the lakes.

“At every stage, we have been voted down by both Mayors Smith and Matthews, the Labor councillors and Independent Greenaway.”
Cr Pilon said she tried to have the funding directed towards a State Government expert panel to follow their recommendations for the lakes system, however, Council voted against that.
At last year’s state government election, it was promised that an expert panel would be established to examine the management of Tuggerah Lakes and The Entrance Channel.

Parliamentary Secretary for the Central Coast, Adam Crouch, said Minister for Energy and Environment, Matt Kean, was “working through the process of appointing that expert panel and we’ll have that announcement this year”. “There’s been study after study after study and we saw the frustration again rising in Council last week when we saw the councillors deflect back and say let’s drag out the old study,” he said.
“The reality is that we saw this channel excavated last week and we saw an immediate change in the flooding water levels.

“This situation could have been avoided with a bit of forethought and planning.
“People shouldn’t have to get out there with shovels and risk their lives because it was badly managed in the first place.”
According to Council’s website, it has an Environment Protection Authority Licence to extract 100,000 cubic metres of sand from The Entrance per year, with the most recent programs in 2015 and 2018.
Up until 2009, dredging was undertaken on average every 12 months, however at that time, the former Wyong Council’s Review of Environmental Factors (REF) resulted in a change in the way dredging was conducted and thus a longer time between dredging programs.

Council’s most recent dredging in 2018 removed 45,000 cubic metres before the EPA issued a prevention notice to cease the discharge of sediment waters on to North Entrance Beach.
The EPA said at that time that it had not ordered Council to stop all sand dredging … it could continue as long as it met the conditions of the licence.
No dredging had been undertaken since.

The Mayor was invited to make comment about the Notice of Motion calling for her to resign, however, no response was received by the time of publication.