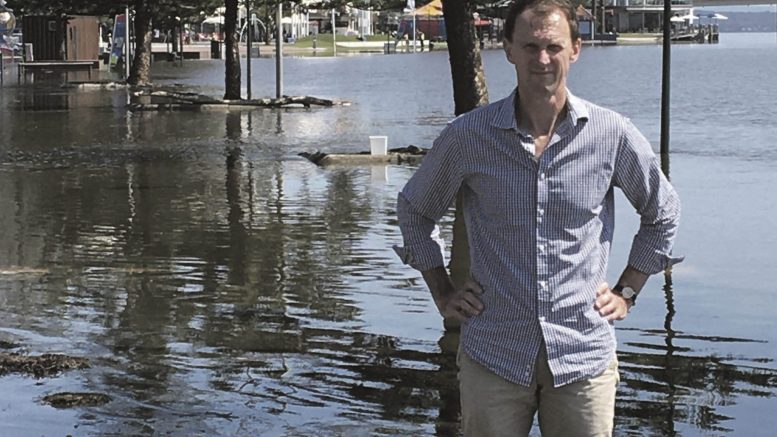 The Entrance MP, David Mehan, has accused Central Coast Council of mismanagement of The Entrance Channel and directly contributing to the current flooding around Tuggerah lakes.

He said Council’s decision to end dredging in 2018, before the usual dredging program had been completed, and its failure to maintain an adequate dredging program, had directly contributed to the current situation.

“Council has failed to maintain its dredge, which it has not decommissioned, with no plan in place to replace it,” Mehan said.

“I support Mayor Lisa Matthews’ call for State Government funding to maintain The Entrance Channel and reduce flood risks.
“I note that an application for extra funding had been sitting on the State Water Minister’s desk since last year.”
Mehan had made similar representations to the Minister for Water recently.

He wrote to the Premier urging the Central Coast be declared a natural disaster zone because of the flooding event.
“Prior to the last State election, the NSW Government committed $200,000 to establish an expert panel to investigate a clean-up plan for the Tuggerah lakes system,” Mehan said.

“The State Government has done nothing to establish this committee.
“The management of the channel must change.
“We need a permanent dredge and a dredging program which has the confidence of the community,” Mehan said.
Mehan welcomed the visit by the NSW Water Minister, Melinda Pavey, to the Central Coast yesterday.

“I note my office was not officially advised of the visit even though the Minister visited The Entrance electorate,” Mehan said.
Council’s application for dredge funding took over six months to be agreed to and the Minister must explain.

“The Minister needs to outline what steps will be taken to reduce the flood risk management around Tuggerah lakes and the channel.
“Will the Minister assure the Coast community that whatever funding is requested by Council to better manage flood risk and The Entrance channel be supported?”
Mehan said the Minister had not responded to his concerns being raised since February 2019.