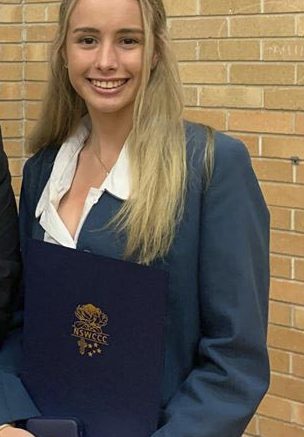 Tucker received her Blue Award for her commitment to touch football refereeing during a ceremony in Wollongong on February 3.

College Principal, Tony McCudden, attended the ceremony with Tucker and extended his congratulations to the Year 12 student on her award.

“Kyla is the first student to be awarded a NSWCCC Blue Award for touch football refereeing.

“This follows her selection for NSWCCC to referee at the National Youth Touch Football Championships in Queensland.

“This is such an honour and we are extremely proud of Kyla and her achievements,” McCudden said.