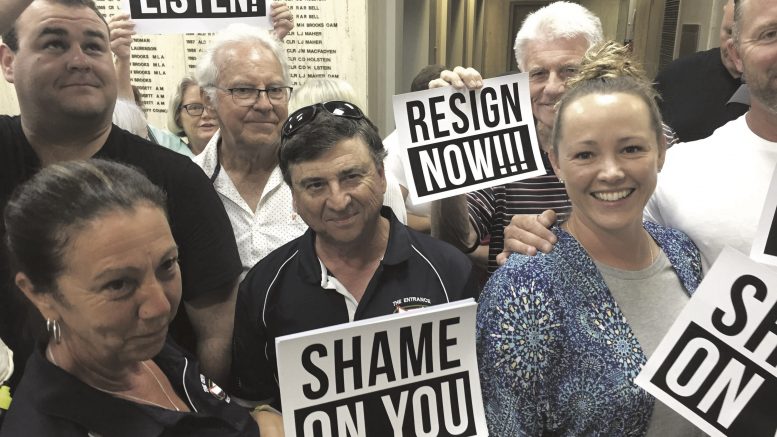 As the clean-up continues following the devastating storms earlier this month, Central Coast Mayor, Lisa Matthews, is weathering a storm of her own.

A motion going before Council at its February 24 meeting calling for her to resign due to an “unprecedented collapse in community confidence in Council”.

The motion will be brought by Councillors Bruce McLachlan and Greg Best, as a community campaign brews on social media to start legal class action against Council to compensate for damage caused to properties during the flooding of Tuggerah lakes which started on February 8.

The motion calls for the Council to support the community’s call for the Mayor to resign “in the spirit of acknowledging the community outrage”.
Cr Matthews and, indeed, Central Coast Council as a whole, has copped a fierce community backlash in the wake of the storms, specifically over the delay in excavating The Entrance channel to release banked-up floodwaters around the Tuggerah lakes system.

Angry residents from the north of the region packed out Council’s last meeting on February 12 in the wake of confusing reports as to action taken by the Council after Tuggerah Lakes peaked at the minor flood level of 1.67m on February 10, exacerbated by abnormally high tides.
The Mayor reported on radio that staff had started asking for permission to widen the lake opening on February 10, but had to “make sure it was safe, and a low tide, before we started to dig”.

But the NSW Department of Planning, Industry and Environment (DPIE) Crown Lands issued a statement saying Council contacted DPIE at 8.23am on Tuesday, February 11, seeking approval to widen the lake opening to manage flood risk.
The statement said Council was advised at 9.25am on Tuesday, February 11, that it could consider using emergency powers under the Local Government Act for the widening or do it under the Council’s existing licence.

“The Council advised at 12.09pm on Tuesday, February 11, that it intended to use emergency powers to widen the lake opening,” the statement said.
The Mayor announced on the afternoon of February 11 that works were underway at The Entrance channel at the Karagi sand spit to remove sand from the northern side of the existing channel and to attempt to redirect some of the flow from the existing channel further to the north.
“These works are to support realignment of the channel back to the northern side of the rock shelf and to help protect public infrastructure at The Entrance,” she said.

Cr Matthews said that particular day was the best opportunity to conduct an operation of this nature because of the abating swell conditions.
The angry public consensus expressed on social media was that actions taken were “too little, too late”.

NSW Water Minister, Melinda Pavey, visited the flooded areas and held a press conference at The Entrance on February 18, saying council “had the authority, the ability, the licence was there to dredge and ensure that channel was opened in a way to avoid many of the problems we had”.
Pavey announced $600,000 funding for dredging at the Entrance and Council has agreed to match that funding.