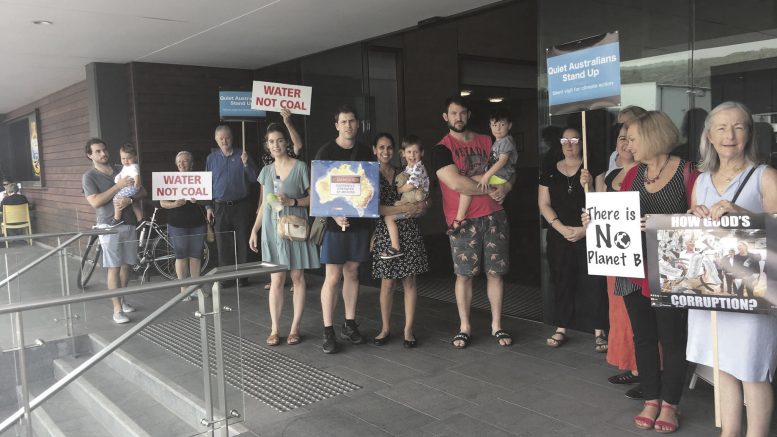 A recent demonstration held by Quiet Australians Stand Up

A quiet protest to be held outside the West Gosford office of Member for Robertson, Lucy Wicks, on February 22, will seek support from the Federal MP for action on climate change.

Co-ordinator, Maree Wade, who has organised the protest on behalf of Quiet Australians Stand Up, said she was hoping for a large turnout of residents in favour of evidence based climate change policy.

Protesters will urge Wicks to publicly support a conscience vote on a climate change bill proposed by Independent MP Zali Steggall, set to be considered in coming weeks by Federal Parliament.
“If the government opposes a conscience vote and opposes the bill, we will urge Wicks to cross the floor in support of the bill,” Wade said.
Among other things, the bill proposes a net zero emissions target by 2050, a carbon emissions budget, and assessments every five years of national climate change risk.

“We are a group of ordinary people with little or no history of demonstrating in the past,” Wade said.
“We are alarmed into action due to the incompetency evident during the recent devastating bush fires, the lack of leadership, the influence of fossil fuel industries and the erosion of democratic processes.
“We thought our Government representatives would protect the citizens of Australia as best they could, including listening to experts and planning for unprecedented but not unforeseen natural disasters.
“Instead we feel abandoned by our Government.”
Wade said her first demonstration, held on January 24, wattracted 14 adults and five toddlers.

“I first came across the organisation Quiet Australians Stand Up in a Facebook post about six weeks ago,” she said.
“At the time, I was feeling apathetic and emotionally exhausted from seeing the catastrophe of the bushfires and the devastating impact on our beloved country burning out of control.”
Wade said approaches to Wicks asking her opinion on climate change had received no response.

“This was the last straw for me,” she said.
“This quiet Australian has now woken up.”
Wade said she was also disappointed by the Labor Party’s lack of a concrete plan for climate action.
“Every MP must be targeted to show that we want an all-inclusive approach and a plan of action for a safer future before it’s too late,” she said.

The February 22 protest will be held from 9.30am-10.30am.
Wicks said the science on man-made climate change was clear.
“Climate change is playing a role in driving increasing temperatures, more severe droughts and longer fire seasons.
“It has undoubtedly been a factor behind this season’s unprecedented fires, along with the drought, how land is managed, the way hazard reduction burns are planned and carried out, the locations of homes and the building materials being used,” she said.

“The Federal Government remains committed to responsibly reducing our carbon emissions, as part of the global effort to tackle climate change.
“We are on track to meet and beat our emissions targets, while at the same time putting downward pressure on electricity prices and ensuring that there is job security for the thousands of workers who rely on energy intensive industries like manufacturing, for employment.
“We beat our first Kyoto target by 128 million tonnes and we are projected to beat our 2020 target by 411 million tonnes.
“According to the latest official projections, we are also on track to meet and beat our 2030 Paris Target, which is a 26 to 28 per cent reduction of emissions on 2005 levels by 2030.

“This represents a 50% reduction on Australia’s emissions per person and puts us well ahead of comparable countries like the US, Japan and the UK.
“The Morrison Government believes the pathway to a meaningful impact on global emissions is through the development of and investment in new technologies, not taxes.
“That’s why the Government is developing a Technology Investment Roadmap, which will set up an enduring, strategic approach to Australia’s investment in low emissions technology.