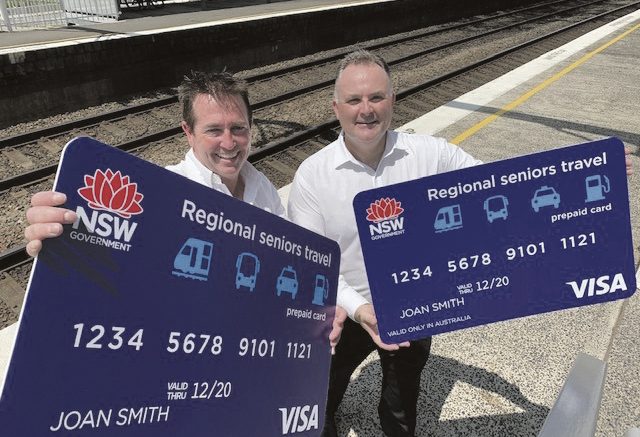 There have already been more than 8,000 applications made on the Central Coast for the $250 Regional Seniors’ Travel Card announced recently by the State Government, but the Opposition says eligibility for the cost saving initiative is too limited.

Member for Terrigal, Adam Crouch, said he had fought hard to ensure that the Central Coast would be part of the regional rollout, and applications made so far on the Coast equated to a collective cost saving of $2M.

The $250 Regional Seniors’ Travel Card can be used to buy fuel, taxi services or NSW TrainLink pre-booked services.
But Shadow Minister for Seniors and the Cost of Living, Jo Haylen, says seniors who receive a carer’s payment or a disability support pension are ineligible.

“The Government has bowed to pressure from Labor and the community to include DVA Gold card holders in the scheme, but has stopped short of helping the neediest and most vulnerable seniors in regional communities,” Haylen said.
“I am furious that seniors on the disability support pension have been forgotten again.”

Minister for Regional Transport and Roads, Paul Toole, said more than 100,000 rural and regional seniors had successfully signed up for the card since applications opened on January 29.
“This is the first time we are rolling out a program like this,” Toole said.
“This card puts $250 in the pocket of regional seniors, which can mean an extra few trips to visit grandkids living in other parts of the state, the ease of staying connected locally, or the ability to volunteer in local community groups.”

Toole said eligibility requirements had been widened to include pension aged veterans collecting a Service Pension or recipients of a War Widow Pension through the Department of Veterans Affairs.
“We’ve heard the feedback from the community, which is why we are now including more seniors in the program,” he said.

“Veterans who are now eligible will be able to apply in the coming months, once we have made the necessary updates to our application system.
“This is a new program developed in line with the policy we announced at the election, which was costed by the Parliamentary Budget Office.
“Labor had no plans to ease this cost for rural and regional seniors and refused to match our commitment.

“At this stage, we have no plans to further expand the eligibility criteria.”
Eligible seniors have until November 30 to apply for a card in 2020 and 12 months to use their card from the date of activation.
Toole said people with disability may be able to access the Taxi Transport Subsidy Scheme, which supports residents who are unable to use public transport because of a severe and permanent disability.

Those caring for someone with a disability may be eligible for the NSW Companion Card, which allows a person’s carer free entry into participating venues and events.