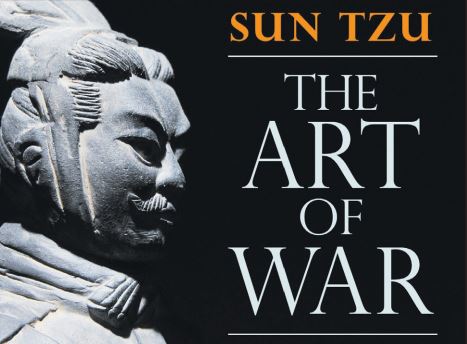 Meeting #5. On Sun Tzu’s Art of War (and modern applications for Coasties)

We’ve been on the run this week, hounded by the Paparazzi from the Peninsula News from one craft beer house to the next.

Desperate they were, to capture just a snippet of our knowledge, our clarity, our genius. Robbo said he knew how poor Lady Di must have felt now – not just being chased across the Rip Bridge in his Rugged X, but his spouse too had moved into the spare room across the hall.

But there was no genius that could outshine that of our very own Boof. As he predicted, Mike Baird was forced into a hasty retreat from his Prohibition of the Dogs. And so, the five refugee greyhounds he had taken in for free were now worth a small fortune. All except the small brindle bitch of course.

She couldn’t even catch Boof’s foxy, but she was a great comfort to him on those long nights, gently licking his toes as he lay on the couch ruminating on Nietzche. He swears her saliva healed his tinia. In any case, Boof offered the proceeds of the sale of the other dogs to Thommo to kick start his new career – as a “social justice warrior”.

It was only fitting therefore that we came together at the Ettalong Dredgers Bar to help our new warrior decipher Sun Tzu’s Art of War. “Who exactly is the war against? ” I asked. “The entrenched, conservatist neo-liberals? ” “Christ no, Joffa, ” Thommo replied. “It’s against all the other social justice groups. ” “But surely they all unite against tyranny for the common good? ” Awkward silence. Robbo saved me from own naivety by jumping straight to the matter at hand.

“Old Sunny gave us five principles to follow. The first one is all about “attack”. He says to choose carefully which battles you fight, to only attack when the odds are stacked in your favour … and then swoop like a falcon. A quick battle’s a good battle, he says. ” We set about identifying another social justice warrior group we knew we could beat. We figured the Knitting Nanna’s of Kincumber would be a good opener. What threat could they pose – a bunch of little old ladies armed with sharp knitting needles.

We could attack from Woy Woy in the late afternoon when the sun would be in their eyes. Even better, the Kinny was just up the road for ‘afters’. Enthused by our progress we moved on to principle #2 – “strategy”. “Sun Tzu says to have a clear goal – he reckons the focus should not be on the conflict itself, but on the ultimate resolution. ” Robbo continued. “He says to appear weak where you are strong, and strong where you are weak. ” “Wait, do you even have a goal Thommo? ” asked Johnno.

“Well, no … not really. You see, I don’t actually stand for anything – I just criticise everything I don’t stand for which, I guess, means everything. ” As profound as that was, we still decided he needed a goal – something noble, something all Coasties could get behind, anything that might offer a good hashtag really. We discarded some of the more fleeting activist movements like Climate Change, Fairness in the Workplace and Koalas Against Clamidia. Johnno was a member of the Coast Asexuals – he’d added the A to LGBTQIA, but branch-stacking in the Killcare division by old married blokes in recent times had resulted in its monthly meetings turning into poker games.

In the end, Thommo settled on the “Wise Old Men with Beards and Trucks”, or WOMBATs as he liked to call them. What an inspired choice! Something that could one day even challenge those wretched Koalas for supremacy. The rest was easy – our strength was our deep intellect, and that was always well hidden. And we appeared weak in every other way – Thommo said we could choose any one of 10 weakness to deceive our foes with. Really, those Nannas didn’t know what they were in for. Principle #3 was “alliances”.

Now this was harder. Philosophers of our standing always find it difficult to lower ourselves and engage with the fallen man. We considered an alliance with the LGBTQIA folk at Coastal Pride. A very talented group indeed, but Robbo said he’d been to the latest Cabaret show and it made him feel a bit funny, so we let it slide. In the end we decided it was just as good to break up someone else’s alliance.

And so we planted some fake news over at “Save our Dolphins” that the “Save our Sharks” people had released new research to show that dolphins were in fact responsible for most shark attacks off NSW. We’d drive ourselves between the two groups and fight them on two fronts – when had that strategy ever failed? We moved on to principle #4 – “armies”.

“Sun Tzu says an army’s strength comes from unity not size, ” said I. Everybody nodded. The Lions, after all, had won a grand final once with just 11 men. They were completely unified by the Ref sending off both front rowers for excessive display of bum-crack. We pondered what we could do to build unity in our ranks. “Wait, do we even have an army Thommo? ” “Bugger! I didn’t think about that either. ”

There it was – another road block in our path to global domination.

Oh, and righteousness … you need a lot of righteousness too. It don’t matter so much what the message is, as long as its angry and righteous. ” “Is that true? ” Thommo asked. “Absolutely, ” said Robbo. “If you were as good at communicating as I am, you would know that swearing at people is the most effective way to get them to think the way you do. ”

“That’s offensive Robbo, ” yelled Johnno all of a sudden. “It’s a personal attack on me … personally. I feel like you’re only bringing it up because I’m a redhead. You’re ranga-phobic Robbo you are. I need a safe space right now! ” Robbo was taken aback for a moment. “Sorry, Robbo, ” Johnno then said. “I didn’t mean any of that.

I was just showing Thommo how to do it. ” We all nodded our appreciation. Both smart and selfless is Johnno. But I must say, I was starting to tire by this stage. It takes a lot of energy to keep oneself in such a highly intelligent state of mind for so long. And there was still one element left, principle #5 – “the use of spies”.

“What enables the wise warrior to conquer is not the power of men, but the power of knowledge, knowledge that cannot be elicited from spirits, obtained from experience, nor by any deductive calculation, but only by the use of spies. ”

That was the teaching of Sun Tzu said I. “It’s all good Joffa, ” Boof chimed in late, as he always does. “My nanna’s in the Knitting Nanna’s of Kincumber. ”