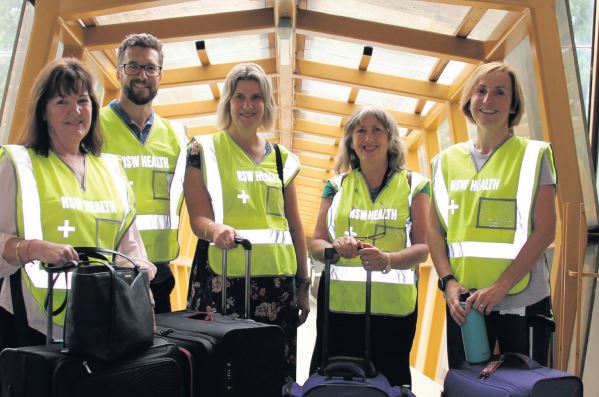 CCLHD mental health staff have departed to the South Coast

The five CCLHD staff including social workers, occupational therapists, counsellors and nurses will be based in critical areas across the South Coast including Emergency Departments and evacuation centres.

Their work will include delivering psychological first aid, clinical assessment and appropriate interventions as part of a state-wide whole-of government response. They will also have a consultation role, providing mental health advice to emergency staff, welfare groups and community agencies on the front line.

“As part of CCLHD’s disaster management plans, we have a number of teams on standby to support those affected according to needs. “During times of crisis we collaborate and work closely with communities and other Local Health Districts to determine what is required and to provide assistance where we can, ” CCLHD Acting Chief Executive, Kate Lyons said.

“This is the first time our mental health staff have been deployed to an area outside of our local area to assist with a disaster response, but all our staff are keen to help in any way they can, alongside their colleagues from other Local Health Districts throughout NSW. “Mental health support plays a vital role in helping individuals and communities recover from a disaster.

“The impact can be far reaching, the effects can be long-term and the response requires flexibility. “We are grateful to the mental health staff who have agreed to be a part of this disaster response team. “Their commitment and dedication to helping others in the face of uncertainty and adversity is admirable, ” Lyons said.

Other Local Health Districts have also provided support to the southern and northern NSW regions affected by fires. The five CCLHD staffers will remain on the South Coast for as long as they are needed.