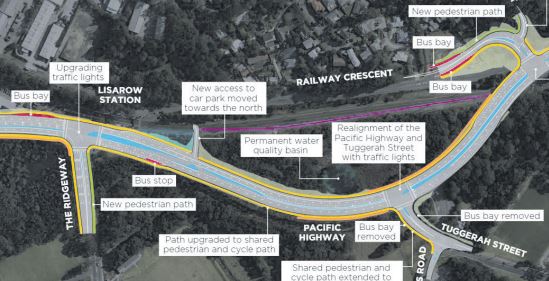 The continuation of Pacific Highway improvements through Ourimbah to Lisarow is powering ahead with piling work for the new rail bridge now underway.
The road widening to two lanes each way is taking place between Ourimbah St and Parsons Rd and is a $178M investment by the NSW Government.
Parliamentary Secretary for the Central Coast, Adam Crouch, said the project was a game changer for the region.
“It will improve traffic flow and cut travel times for about 30,000 motorists travelling this section of road each day,” he said.
The key feature of the 1.6km section of the upgrade is a new rail bridge across the train line.
NSW Regional Roads and Transport Minister, Paul Toole, was on the Coast on Monday for a site inspection of the project and said that work had also started on building retaining walls for the highway.
“Recently we have seen the completion of 95 piles to help with the construction of retaining walls next to the new section of the Pacific Hwy, including north of the Railway Cres intersection,” Minister Toole said.
Ground improvement work for the future alignment of the highway between The Ridgeway and Parsons Rd is complete and earthwork to widen The Ridgeway is now underway.”
There will be new traffic lights at the Railway Cres and Tuggerah St (formerly Macdonalds Rd) intersection with the Pacific Hwy and the existing lights at The Ridgeway will be upgraded.
Improved pedestrian and cycle paths will be installed along the highway and there will be improved access to the parking area at Lisarow Railway Station.
Daracon Group was awarded the contract to build the upgrade in November, 2018, and major work started in late February, 2019.