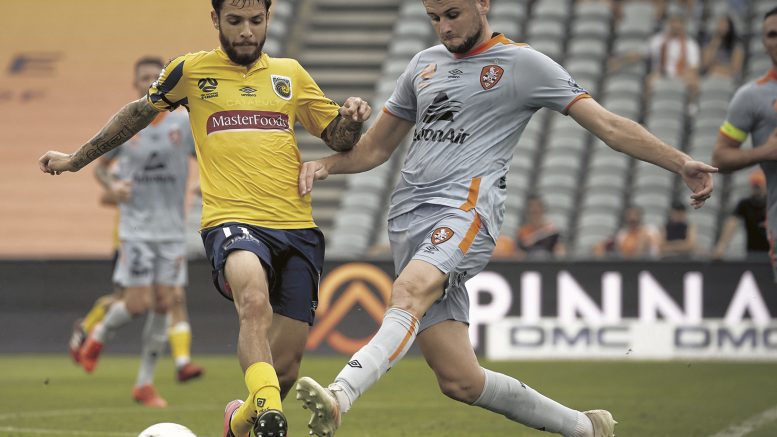 Tommy Oar in action for the Mariners

Vital competition points continued to elude the Mariners on January 25 in their do-or-die match against Brisbane Roar, despite some valiant individual efforts.

It was a bitter pill to swallow for Alen Stajcic’s men, who dominated early with four or five searching strikes, including a header onto the post by Danny de Silva and a ripping curve ball from outside the box by Jordan Murray, punched away by Roar keeper, Jamie Young.
The Mariners however could not capitalise on their opportunities and it was Brisbane’s Corey Brown who would be the only player to find the net, squeezing through an unlikely deflection in the final minutes to snatch victory for the Roar.

The Mariners have not beaten Brisbane since 2014, seventeen games ago.
The loss exposed the lack of goal-scoring penetration for the Mariners, for whom “own goals” are now challenging for the honour of top scorer for the season.
The Mariners have found the net just 13 times this year, with almost half of their goals coming from penalties.
The pressure on the Mariner’s bench was evident on Saturday night with a rare display of frustration from Coach, Alen Stajcic.
“I thought we had enough control and chances and possession and territory to win that game, but it just didn’t happen for us today,” Stajcic said after the game.
“That’s nine times we’ve hit the post now this year and you don’t get points for that.”

The win moves the Roar closer to the top six on the A-League ladder, while the loss sees the Mariners remain in 10th place, with just one win in their last five games.
Only the hapless Newcastle Jets sit between them and a second consecutive wooden spoon, and with only 12 games remaining in the 2020/21 season, time is running out for a resurgence.
If the Mariners finish at the bottom of the ladder, they will forego a place in the next pre-season FFA Cup tournament.
The Mariners have also struggled all year in defence, conceding 25 goals in their 14 matches.
On a brighter note, Josh Nisbet had a solid match, his second ever in the A-League, including an intercept in centre field to set up Jordan Murray for his near miss.
The Mariners now turn their attention to the Western Sydney Wanderers, who will be travelling to Central Coast Stadium on Sunday, February 2, for Round 17 and are expected to bring plenty of supporters with them.
That game will commence at 4pm.