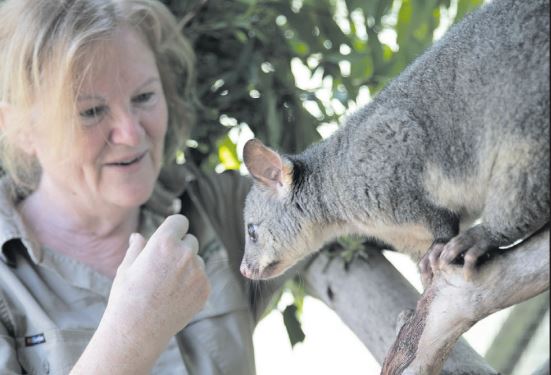 Tassin Barnard with one of the recovering ringtail possums.

With almost all of its animals back home following temporary relocation due to the bush fire threat in December, Australia Walkabout Wildlife Park is now turning its attention to doing what it can to help in the rehabilitation of injured and displaced wildlife.

The Park undertook a mammoth relocation project late in 2019, finding suitable lodging for almost 300 animals in a variety of locations, with the Three Mile fire posing an immediate threat to the Calga property. With the fire taken off the RFS danger list in mid December, the huge task of bringing them home began.

The Park’s Operations Manager and owner, Tassin Barnard, said only a handful of animals were yet to return. “When we took them to their temporary homes, many of the animals were distressed, but they settled back into their home here immediately when we brought them back, ” she said.

“And now we are working with the people who helped us as they rescue all the injured and displaced animals out there. ”

Barnard said many of the displaced animals were receiving intensive attention from specialised carers and they would need a temporary home before being re-released into the wild once they were restored to full health and their bushland homes had regenerated. “Our immediate work in supporting the carers has already begun.

“We’ve been putting up water and food stations and nest boxes around the Park and we’re already starting to receive animals which have recovered from their injuries but are still homeless, ” she said. “At the moment we have only a few, some possums and turtles and a spotted quoll, mostly from the fire fields around Central Mangrove and Charmhaven.

“We would like to welcome a lot more as the need arises, and to do that, we need to prepare. “We have to do that extremely carefully as all of our natural bushland in the sanctuary is already occupied. “If we put too many animals in, there won’t be enough wild food and shelter for all of them. ”

A GofundMe page set up in December, initially to help with relocating the Park’s own animals and to increase fire protection of the native habitat, and now to give homeless animals a second chance to be wild, is continuing. “One thing we have to do is to help the bush to produce more wild food, even though there is a drought, with access to water being an ongoing challenge, ” Barnard said.

“Eventually the plan is to put fox proof fences around the entire property. “At the moment, less than half of it is fenced and, like Popran National Park next door to us, the rest of the property has a problem with foxes, and even feral dogs and cats. ”

With a little over $60,000 in the GoFundMe pledges at the moment, Barnard said close to $3M would be needed to do everything which needs to be done. “We will do things along the way as we can, ” she said. “Fox proofing alone could cost well over $700,000.

“We would need a highly specialised fence design to cover around 100 acres, and it’s not flat country, with rock ledges and gullies. “But we must ensure any animals we take in do not have to cope with feral predation. “After the fires, the foxes are also struggling to find food, as they will only eat live or fresh food. “This puts additional pressure on our remaining native wildlife. ”

Barnard said it was also important for temporarily housed animals not to become too dependent upon keepers at the Park. “We can’t let them know that it is us who is feeding and watering them. “We must ensure that they are competent in fending for themselves when they are eventually returned to the wild, ” she said.

Barnard estimated that the Park lost around $80,000 in income due to its five-week closure during the period of fire danger, with many 2020 bookings cancelled outright. Because the closure came about due to precautionary relocation of the animals and not actual fire damage, it is not eligible to make an insurance claim. And because it is a not-forprofit organisation but not a registered charity, it is also not eligible for government relief.

“But we will take that on the chin, ” Barnard said. “We have learnt some valuable lessons. “We’re not suggesting we’re invincible, just that we understand the responsibility of protecting a bush sanctuary in the face of a natural disaster, and with our community, we are ready to face anything that nature throws at us. ”

You can contribute at www.gofundme.com/f/SaveWalkabout-Sanctuary