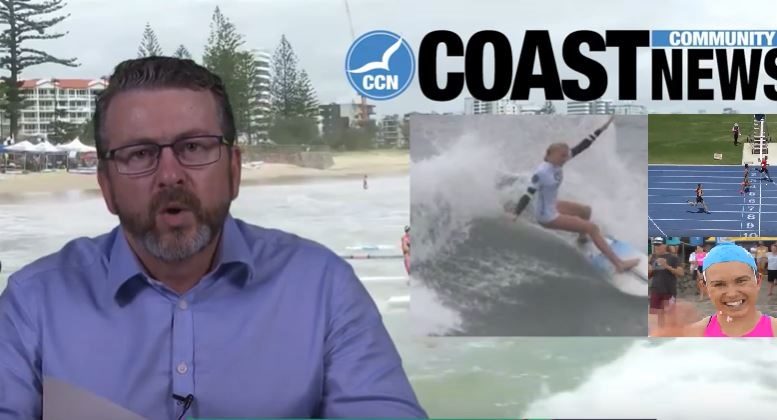 Umina Surf Club star, Jemma Smith, has again excelled in the Australian interstate championships this weekend on the Sunshine Coast.
Smith was part of the successful NSW squad who won the title for third year in row.

The tournament saw competitors from all over Australia thrashing it out on the sand and in the waves.
Smith was in scintillating form on the ski, taking out the open woman ski event as well as the open mixed ski relay.

She also featured in NSW’s win in the open women’s tube and board rescues. But it was her 5th place in the open ironwoman that was perhaps the most impressive performance of all.
In her favourite leg, the ocean ski, Smith was wiped out by a chest wave at the start, giving her rivals a 30 metre lead.
Smith fought back even took the lead during the swim leg, but just faded in the final stages of the board leg to finish a close fifth.

Gosford track specialist, Tyler Gunn, returned from injury in impressive fashion with two strong wins in the NSW Athletics Country Championships in Dubbo, January 18.
Gunn ran a personal best time of 21.65 to win the 200 metres on the Saturday and then backed up the following day to cruise to victory in the open 400 metres in a time of 47.71 seconds.
Gunn was forced out of the IAAF World Championships in Doha in 2019 with a hamstring tear and said he was delighted with how he now felt during and after the two events.His previous best for the 200m of 21.79 was in the Glynis Nunn Shield in January 2019
Here’s some footage of the race, with Tyler Gunn in Lane 6.

Gunn’s strong return from injury is timely with the 2020 Tokyo Olympics fast approaching.
Gunn has until the end of June to reach the Olympic qualifying time of 44.90 seconds in the 400m.

Shelly Beach’s Milli Allport is the16 year old girls’ national Rip Curl GromSearch surf champion
Allport claimed the 16 year old Girls’ Division crown after a dominating performance in the final event of the series at Bulli’s Woonona Beach.
Allport met Barwon Heads’ Ellie Harrison in the final in light conditions, with the result decided by quality not quantity
Allport did not disappoint finding two magic waves to post a total of 10.97 for the round.

And that win sees Allport qualify for the Rip Curl GromSearch International Finals which will be held later this year.
With only three rounds left before finals, some teams will need big performances to start making a charge for the final four.

The match of the Round in the Coast’s first-grade cricket was a clash of titans with Lisarow-Ourimbah taking on Warnervale.
The Magpies batted first on a good track and posted a formidable 217 runs.
Captain Blair Lyndsay again top scored with 75 off 121 balls but was ably assisted by Ben Sunshine who smashed 60 runs off just 46 balls.
S Greentree was the pick of the Warnervale bowlers with 3 for 41 off 10 overs including a very sharp caught and bowled dismissal of Sunshine.
B Russell however put the Wildcats in a sound position at stumps scoring an unbeaten 35 and Warnervale will resume the run chase next weekend at 1 for 53.

Things went from bad to worse for the Central Coast Mariners on Saturday evening a goal to Brisbane Roar snuffing out any prospect of a resurgence from the local club this year.
The Mariners were lively with Milan Duric, Danny De Silva, Tommy Oar and Jordan Murray all testing Roar keeper Jamie Young with no joy.
Roar gathered the ball in the 86th minute finding Corey Brown in space
Brown’s strike deflected off Lewis Miller, leaving Birighitti wrong footed and unable to prevent the late goal.

Taking a step back to pre-COVID times