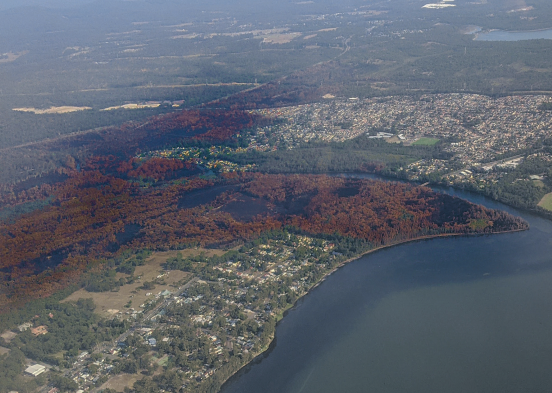 The extent of the area ravaged by fire at Charmhaven, Blue Haven and Wyee. Photo: Central Coast Aero Club,

The fire which started at Charmhaven on New Year’s Eve, and spread over 335ha, is officially out. District Manager for Central Coast Rural Fire Service, (RFS) Superintendent Viki Campbell, said the fire was declared out on Friday, January 17, following significant rainfall. “

There’s still a lot of summer to go and we are remaining vigilant,” Supt Campbell said. “Our mopping up started along the edges of the fire and roads, and went in about 50m where we chopped down trees that could be dangerous. “People should definitely not be going any further into the burnt off areas where there might be some places still affected by fire and falling trees could be dangerous,” Supt Campbell said.

Meanwhile, police are treating the fire as “suspicious” and an investigation into the cause of the fire is continuing. A Police Media spokesperson said there was no evidence to support claims on social media that the fire was lit by youths who discarded lit cigarettes in the bush. The New Year’s Eve fire was reported before noon as a small fire in Arizona Rd, Charmhaven, and quickly escalated to emergency level.

It progressed during the day and even though on ground fire fighting was supported by several water bombing aircraft, soaring temperatures, the intensity of the fire and wild winds pushed the fire front in different directions. The southerly front hit about 9pm and strong winds fanned the fire, pushing it towards Blue Haven across Wallarah Creek. It quickly tore through bushland, leaping over the motorway at Thompson Vale Rd and spreading out over Bushells Ridge and on to south Wyee.

Widespread ember attacks rained on Birdwood Dr in Blue Haven as the fire flared and multiple fire crews were diverted to protect houses there. Police and firefighters were doorknocking in Blue Haven advising residents to evacuate. Evacuation centes opened at Doyalson RSL Club and Avondale University at Cooranbong, where about 170 people from Wyee and Blue Haven sought safe refuge. It wasn’t until later in the night and into New Year’s Day that fire crews could bring the fire under control.

More than 270 properties were saved, however, nine were damaged, and one house in Birdwood Dr was lost in the fire. Crews worked on the first day of the year on strengthening containment lines of the fire in order to limit the chances of further flare ups. By mid morning on New Year’s Day, the RFS reported that conditions had eased across the fireground and the fire was being controlled, so the alert was downgraded to “advice” level, which meant that there was no immediate threat but residents should stay informed. The fire had, so far, consumed about 335ha.

The Pacific Hwy was closed from Goorama Ave at Blue Haven through to the roundabout at Lake Haven Dr for three days, and the Doyalson motorway link road was closed between the M1 freeway and Wyee Rd for two days. Wyee Rd was closed near Gorokan Rd, and because of the safety risks caused by the bushfires, trains and buses were not stopping at Wyee railway station and it was closed. Community meetings have been held on January 17 and 21 at Blue Haven to address concerns and provide information to help residents recover after the bushfire.

They were organised by Central Coast Council and Cr Jillian Hogan said that they were well attended by people affected by the fires, particularly families in Popran Way, where the fire came right up to their fences. She said the team from San Remo Neighbourhood Centre had been working with families to support them in their recovery. “It is an extremely frightening event that leaves long term scars both physically and emotionally,” she said. “Unlike what we have experienced before through numerous floods and storms, the impact of these ferocious fires is very different and traumatising for residents.”

Director of Connected Communities, Julie Vaughan, outlined the numerous support services available to help in the recovery for people, property, pets and the environment. The meetings included talks and information from the Rural Fire Service, NSW Fire and Rescue, the NSW Health, Land and Environment Department, Community and Justice Department and several sections of Council.

Cr Hogan said residents indicated that their main concerns were that they did not know where, and from whom, they could get help. “This ranged from financial help or in practical ways for health requirements, and where to get help for mental health,” she said. “Two things were evident, information is needed to be activated straight away as well as practical assistance. “We need a coordinated approach to disaster recovery, on the ground, locally, to help and support people immediately,” Cr Hogan said.