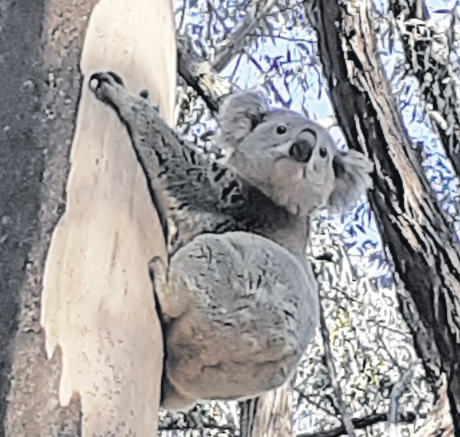 This koala was spotted December in the locality of the coal mine site.

Local environmental group, Coast Environmental Alliance (CEA). is calling for an urgent halt to the Wallarah 2 coal mine because of the discovery of a koala population in the area.

CEA wants Federal Environment Minister, Sussan Ley, to step up and stop the Korean owned Wallarah 2 coal mine which is set to go ahead only five minutes from Wyong CBD. Conservationist and founding member of CEA, Jake Cassar, said “the discovery of a koala population so close to the proposed mine is not only a significant development, but should be considered a game changer”.

“Locals have told me that they have known about the koala colonies in the area for some time, but have kept quiet in order to protect them,” he said. “After this sighting only weeks ago, and in light of Wallarah 2 recently getting one of the final approvals, I spoke with some local residents who understand how important it is to make this knowledge public.

“With the Environment Minister recently stating that around 30 percent of our already dwindling koala populations have been lost to the fires, the survival of koalas should be a national priority. “The massive clearing of native forests in this area to establish the mine and to construct a new train line will be devastating to this koala colony, not to mention the impact on the water supply for over 200,000 Central Coast residents.

“Sensible Central Coast locals are not opposed to sustainable development, but a giant coal mine should not even be considered in the middle of a koala colony, right below our water catchment, and amidst this terrible drought and unprecedented bushfires. “Then, adding insult to injury, there’s the fact that over the 28 year life of this mine, 90 percent of the coal will be sent overseas.

“It just makes no sense that the government has given this the green light.”

Cassar said that unless the koala habitat was protected they would likely, in the not too distant future, become functionally extinct in the wild. “You don’t need to be a “greenie” or an activist type to want to protect these national treasures, you just need to have a brain and a heart,” he said. “Where there’s one koala, there are more.

“Our group has photographic evidence of koalas at Mangrove Mountain, the Watagan State Forest, and even in Gosford. “These populations, and others across the Central Coast, can play a vital role in the survival of this iconic Australian species. “The area around the mine site obviously has the exact Eucalyptus trees that these koalas rely on for their daily subsistence.

“The area to be mined may be one of the last bastions that can sustain this colony and it needs to be urgently protected before the mining company gets in and starts bulldozing.” Cassar said that Minister Ley recently asked for urgent koala habitat mapping to identify the worstaffected areas from the recent bushfires in Queensland and Northern NSW.

“In Brisbane last week, Ms Ley met with a panel of federal and state bureaucrats to determine where to spend the $6M allocated in the May federal budget to protect koalas”, Cassar said.

“The government has the full power to gazette the surrounding Jilliby State Recreation area into the National Park, and in turn put a stop to this foreign monstrosity of a coal mine,” he said. “CEA is calling on our local, state and federal representatives and environmental advocacy groups to urgently contact Ms Ley to see that our local koala populations are not only destined to survive, but to thrive well into the future.”

Giant Pelican finds a US rival