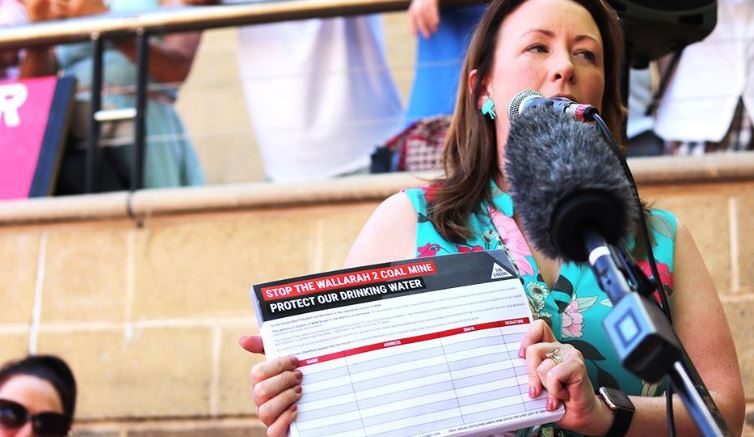 NSW Upper House MLC Abigail Boyd at rally in Wyong against the Wallarah 2 coal mine proposal.

NSW upper house MP and Greens spokesperson for the Central Coast, Abigail Boyd, is determined to protect the water catchment areas of the region by seeking to have a moratorium put in place on coal mining and coal seam gas exploration.

“The Wallarah 2 coal mine will consume gigalitres of our drinking water supply and threaten its contamination, with clean-up possibly taking up to 30 years. ” she said.

“It poses significant threats to the waterways that form the Central Coast water supply system at a time when our water reserves are already being depleted at an alarming rate across the state. “The Sydney and Illawarra water catchments already have the benefit of special protections and are within the remit of Water NSW.

“So why not the Central Coast’s drinking water too? “The Liberal-National Government defends its mining approvals process despite it having led to a longwall mine being permitted in the drinking water catchment of over 340,000 people.

“They defend that process despite it resulting in a mining company being allowed to discharge recycled mine water into that drinking water catchment. “Nowhere else in the world would this be allowed to happen. ”

Boyd said The Greens would continue to “stand alongside the Central Coast community” in strongly opposing the mine.

“The Wallarah 2 coal mine project has never made any sense, ” she said. “The Liberals knew this a decade ago when Barry O’Farrell stood proudly in his Water Not Coal t-shirt and made promises to protect our water catchment, and they still know it now.

“What’s changed over the last decade? “The arguments against this coal mine have only gotten stronger, and yet the Coalition Government is still failing to live up to its promises to protect the Central Coast’s drinking water from this disastrous mine. ”