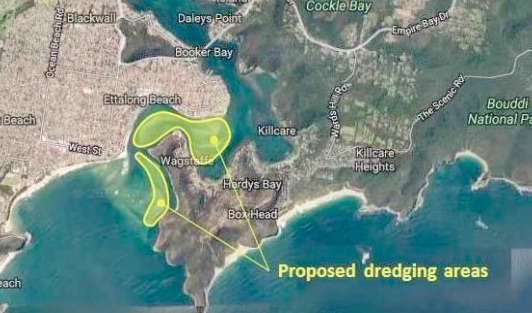 Proposed dredging area shown in yellow but the initial grant applies only to the location closest to Little Box Head. Archive image 2018.

The dredging at Half Tide Rocks will soon move on to Lobster Beach says Wagstaff-Killcare Community Association president Mr Mike Allsop, who is also chair of the Peninsula Waterways Committee.

Mr Allsop said that over the last couple of months residents would have seen their “favourite dredge” anchored to the north side of Half Tide Rocks.

“When conditions permit, it has been trimming the channel in that area to meet the design depth and profile for deeper keeled vessels as well as the ferry, ” Mr Allsop said.

“This area was not addressed last year as part of the emergency works delivered by the State Government, and is now being funded by a joint Council-State Government program. “A feature of this stage of the works has been a floating line to shore opposite Half Tide Rocks to take the dredged sand as a slurry to pipes buried past Ettalong Point and Ocean Beach.

“Wet sand has been deposited along the dune line on the beach, allowed to settle and dry, then distributed by earthmoving equipment. ” Mr Allsop said Central Coast Council had been instrumental in the design and execution of the beach works, informed by various professional studies into sand movement patterns, which, he said, would always be there.

“The dredge is due to complete its work at Half Tide Rocks shortly, and will then relocate to the Lobster Beach area to properly widen the channel to allow vessels to pass in opposite directions. “The current situation is too narrow to permit two large vessels to pass one another on a running tide with adequate safety margins, so this work will be critical. ” Mr Allsop said the original problem of the channel being blocked at Little Box Head was largely resolved, but attention would still be required for ongoing maintenance from time to time given the dynamic nature of the sand banks in the whole area.

He said the association was “very supportive” of the joint program executed by Council and the State Government to keep the waterway open and safe for all users, and especially for continued operation of ferry services. “The Peninsula Waterways Committee which I chair is active in maintaining a solid track of the status of waterways works and in encouraging all the authorities involved to stand by their commitments, ” he said.

This article appeared first in the Peninsula News print edition out now.