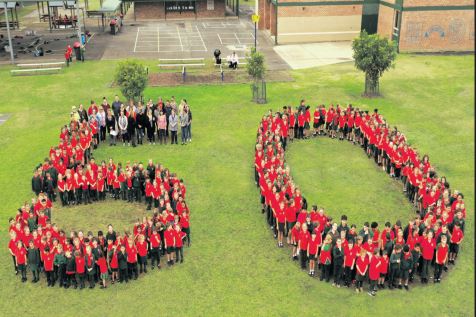 To celebrate the milestone, the school will hold an anniversary day on the day featuring memorabilia displays and their newly minted school history book. A highlight of the event will be the official opening of the schools new commemorative pathway which was funded by the Parents and Carers Group and a Stronger Communities grant.

A recently restored school bell takes pride of place in this new community space. Federal Member for Dobell, Emma McBride, will formally open the pathway. Parents and Carers Group member, Kim Dwyer, said following the opening, a number of festive activities have been planned for visitors to enjoy. Wyoming Public School opened in May 1969 and coincides with the Apollo 11 moon landing.

As we are celebrating 50 fabulous years of education, we’ve arranged for an astronaut to visit on the day.

The astronaut will arrive via a firetruck and there will be plenty of photo opportunities. There’s also lots of festivities too, including a jumping castle, barbecue, balloons, face painting and craft activities, Dwyer said.

School to have family liaison officer