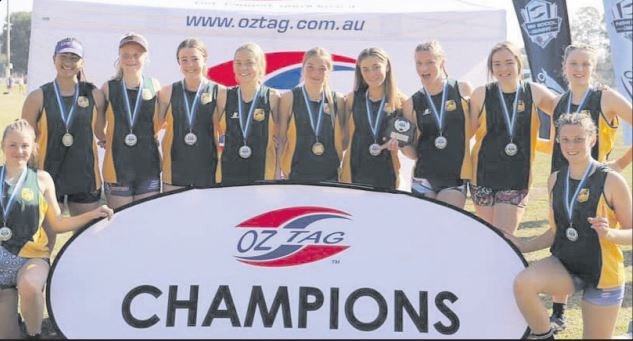 Erina High School has returned from the Opens Girls OzTag NSW Champions of Champions Tournament with a state title and some new silverware for the trophy cabinet.

The two day tournament is the most hotly contested school based oz-tag event in the State, with Erina High School fielding a Year 9/10 Girls team and an Opens team. The Opens side went through all pool matches undefeated, with wins against Liverpool, Randwick, Beverly Hills and Glenwood. They then moved into the finals with a quarter final win over Belmont and semi-final win over Kirrawee. This then put the girls into the state final vs Woolooware.

The game was tight from start to finish, with a full time score of 3-3, said Principal, Karen Nicol. This sent to the match into a drop off. Both teams scored on their first sets, however, Woolooware scored another quick try to take the match with our girls finishing second in the State. Best and Fairest went to, Ashlee Russell, and Coaches Award to, Sarsha McGurk, Nicol said.

Erinas Year 9/10 side also went through the pool matches undefeated with wins against Caroline Chisholm, Mattraville, McCarthy, Hunter Sports High and Oxley. They defeated Bridageen on ranking in the quarter final, and Glenwood in the semifinal. The state final match was against St Marys Star of the Sea and our girls dominated from start to finish with one on their best games of the tournament winning 4-2 making our girls side state champions. Best and Fairest goes to, Tayla Montgomery, and Coaches Award to, Olivia Hayes. Well done to both teams on such an amazing tournament, Nicol said.