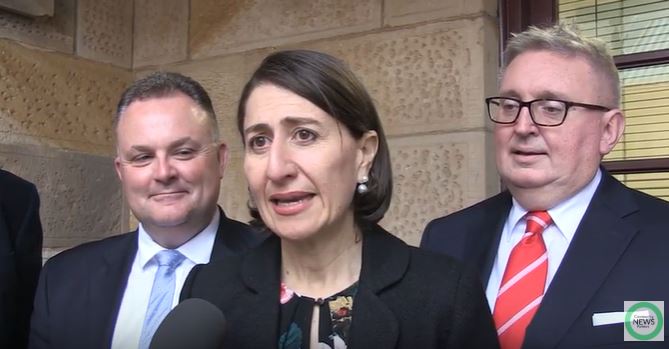 The Premier announced $2 million in refurbishment funding for the Central Coast Conservatorium of Music. Image: CNP

Premier Gladys Berejiklian urged Central Coast council to “hop to it” if it wants State Government help to deliver a Regional Performing Arts Centre (RPAC) for Gosford as she announced a $2M refurbishment of Central Coast Conservatorium this week.

The Premier visited the Con en route to a Community Cabinet meeting at Mingara Recreation Centre with all 23 of her Ministers on Monday, joined by Arts Minister, Don Harwin, Member for Terrigal, Adam Crouch, and Taylor Martin MLC.

“Musicians of the Coast have used this former courthouse and police station since 19787 and its high time it was brought up to date with new performance and equipment essential refurbishment and safety upgrades”, Berejiklian said.

“Providing an inspiring learning space will encourage students to want to learn music and teachers to give their best. I hope it will also attract other young people to think big in terms of musical study. This will be a real boost for the region, with students no longer having to travel long distances for a top class learning environment”.

First pledged in 2015 as part of a $12M commitment from the State Government towards performing arts infrastructure on the Coast, the $2M has been in limbo ever since as plans for a RPAC stalled.

Conservatorium Board president, Peter Brandon, said “the decision to deliver the $2M earmarked specifically for The Con was music to our ears”. Brandon said “the Con operates out of the oldest heritage listed building on the Coast, a collection of de-mountables and a host of halls, rooms and venues all over the Coast”.

“This funding injection will allow us to transform the Con through sensitive refurbishment, upgrades to bathrooms, the kitchen, teaching and rehearsal spaces and bringing in a new piano and furniture, including seating in the Robert Knox Hall, he said. The funds will also allow master planning for long-term future capital works”.

MP Adam Crouch described the announcement as “a watershed moment for The Con and the entire region”.

Minister Harwin said “the money would give The Con a whole new lease of life which would continue to inspire students and delight audiences for years to come”.

Conservatorium Deputy chair Claire Braund said “master planning for the future could pave the way for a 500-600 seat acoustic performance hall, which is what the Coast desperately needs” she said.

“Talks were ongoing with Central Coast council regarding a council-owned block to the rear of the Con as a possible site. But this $2M allows us to start with a small footprint and build from there”, she said.

Premier Berejiklian said “the $10M originally pledged for a RPAC (to be matched dollar for dollar by both the Federal Government and the then Gosford Council) was in limbo. We are waiting for Central Coast Council to come to us with a proposal and we will consider it closely”, she said.

“This is the time to develop the region and council is sitting on its hands not doing the work required. When councils and State Government work together great things can happen. We have a sense of urgency but we don’t understand why council is not being more co-operative”.

See an expanded report in this Thursday’s Coast Community News, on our website and on the 5@5 Video News.