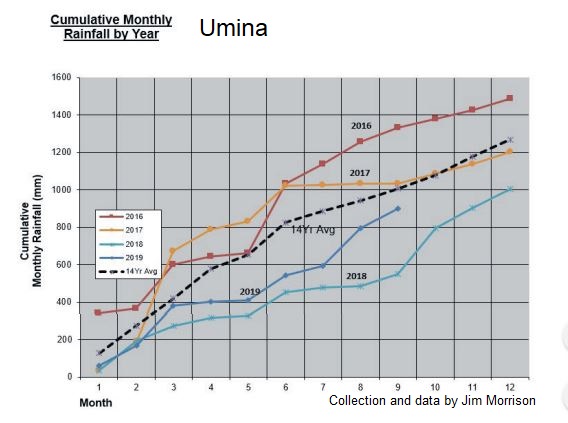 The final fortnight of September has delivered another short but concentrated blast of rainfall for the Peninsula according to data compiled by Umina’s Mr Jim Morrison.

From September 17 to 19 the Peninsula area copped a drenching with 68mm of rain recorded on the 18th alone. The heavy showers were fleeting though, with the area returning to its ongoing dry conditions from the 20th onwards with no further rainfall recorded as of September 27.

The result brought Septembers rainfall total up to 104.4mm well above its average total of 65mm. It’s a good sign of things to come for the Peninsula with October and November both known for consistent rainfall and their own short bursts of heavy rain as indicated by Mr Morrisons data.

Time will tell if the Peninsula will reach its usual yearly rainfall total of 1268mm with the current figure sitting at 898.8mm. Residents should hope for the best but expect the worst though as Council continues to warn water restrictions are on the horizon.

This article appeared first in the Peninsula News print edition Sept 30, 2019. Out now.

School embarks on a virtual lap of the nation

Masons open their doors and give