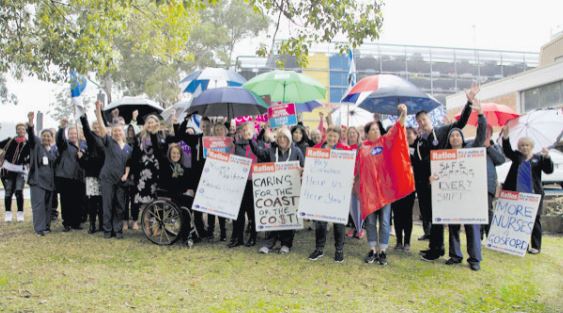 Some of the nurses and midwives at last Thursday’s protest

Despite torrential rain, more than 60 nurses rallied at Gosford Hospital last week to call attention to what they say are worsening conditions at local health facilities.

They gathered in the hospital grounds on August 29 to express their growing concerns for patient safety and serious understaffing issues throughout the facility. They were joined by member for Gosford, Liesl Tesch, and Federal Member for Dobell, Emma McBride. Tesch said she was hearing loud and clear that understaffing at Gosford Hospital is worsening and patient safety is being put at risk.

Absent nurses are not being replaced, and sickness and injuries are becoming endemic due to being worked to the bone, she said. Wards are understaffed, patients don’t get the care they need, and nurses are at breaking point.

Senior and experienced nurses don’t have the time to do training and supervision of younger nurses, and new nurses are leaving because they are feeling unsupported and overwhelmed.

Tesch said nurses fear they will be used as scapegoats in coronial inquiries into patient deaths as overwork and understaffing are not accepted as valid reasons for negligence if death occurs. And yet they fear retribution if they tell management that they need more support, she said. Wards are working three staff short on some shifts and nurses are concerned that they will be held responsible if something goes wrong with a patient, their registration is on the line, she said. Tesch said it was time for the State Government to acknowledge the risk to life that health cuts have caused.

NSWNMA General Secretary, Brett Holmes, said the issues were compounded by the busy winter period and the need to open additional unfunded beds to meet growing demand on the health service. Local nurses and midwives feel let down by the Local Health District for not adequately addressing their concerns or implementing long-term solutions to uphold patient safety, Holmes said.

The rising number of vacancies is a major concern because it has prompted a reliance on overtime by the nursing staff. This has created a challenging environment, particularly as the nursing staff try to maintain safe patient care for the community.

Our priority is creating a safe environment for our patients and staff, and daily meetings are held to ensure nursing levels are appropriate and meet patient demand. Nursing rosters are reviewed to ensure adequate staffing, including during unexpected periods of increased demand and unplanned staff leave.

Rostering also takes into account our nurses wellbeing, ensuring a reasonable workload. Montague said CCLHD increased its workforce by 21 percent, including more than 450 FTE nurses, between June 2012 and June 2019. The 2019-20 budget for CCLHD is $873M; this is an increase of $32M on the previous financial years annualised budget, he said.

Committee calls for marketing for the Peninsula