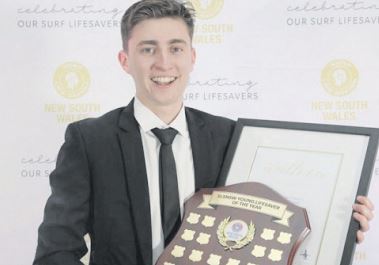 Woy Woy’s Mr Matthew Calbert has been named the Central Coast Young Volunteer of the Year.

A long time member of Ocean Beach Surf Life Saving Club, Mr Calbert was honoured for his enduring commitment to the surf lifesaving movement, including the hundreds of patrol hours he put in over the past year to make his local beach a safer place.

The award was made on September 12 at Gosford Golf Club. The 22-year-old has also started to broaden his volunteering experience by joining the local SES. The Centre for Volunteering chief executive Ms Gemma Rygate said volunteers from across the region had given much to the local community.

Volunteers build connections for people in towns and communities across the region, Ms Rygate said.

As a regional winner, Calbert is now eligible to attend the Gala State Ceremony where the overall NSW Volunteer of the Year will be announced later in the year.

This article appeared first in the Peninsula News print edition. Pick up a copy at your favorite distribution spot.