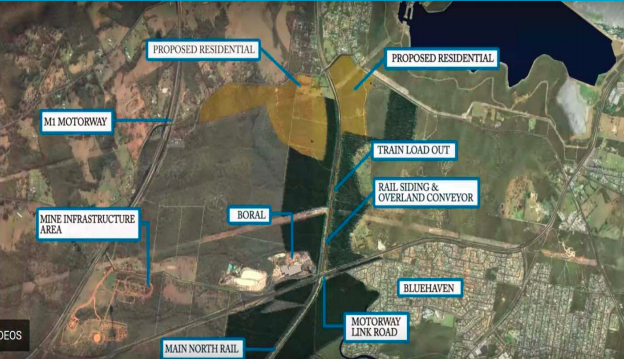 The NSW Government’s approval of mining leases to allow the Wallarah 2 Coal Project to proceed is a “common sense” decision that will boost regional jobs and business opportunities, according to Australia’s main trade union for the mining industry.

Northern District President of the Construction, Forestry, Mining and Energy Union (CFMEU), Peter Jordan, said the community had been waiting a long time for the jobs that would flow from this project.
Wallarah 2 is an underground, longwall coal project approved to extract up to five million tonnes of export thermal coal a year from the Yarramalong and Dooralong Valleys, which is the main water catchment area for the Central Coast.
Majority owner Kores Australia, which manages the mine under the name Wyong Coal, is a subsidiary of Korea Resource Corporation.

“The government has recognised the rigorous assessment process that the project had been through and the Wyong mine has ticked all the regulatory boxes and demonstrated it would comply with the high standards required of NSW coal developments,” Jordan said.

“As with any project, our focus will be on representing workers and making sure that the project delivers permanent, secure jobs.”
The NSW Resources Regulator has estimated the $800m mine will create 1,700 direct and indirect jobs over its 28 year lifespan and will bring $830m in royalties to the state.

Central Coast Greens MLC and spokesperson for Mining, Coal and CSG, Abigail Boyd, “seriously questions” those employment figures.
“Even Adani has admitted that its monstrous mine will result in a maximum of around 1,500 jobs, so how is Wallarah 2 going to create 1,700?” she said.
“As for royalties, it will be at least three years before a single tonne of coal is extracted from the project, and that’s assuming Kores satisfies the licence condition for the ground water study needed before it can start digging.

“Given the freefall of thermal coal prices, and the move away from coal fired powergeneration in countries, including Korea, it is anyone’s guess how this mining project is going to end up being profitable.

“Although it’s hard to predict the benefits to the community from Wallarah 2, it’s easy to predict the costs to the community, being a significant risk to our water supply, an exacerbation of our air pollution problem and, if the number of abandoned unrehabilitated mines across the state is anything to go by, the massive clean up cost involved in rehabilitating the site once Kores walks away.”

Provincial MLC for the Central Coast/Hunter, Taylor Martin, says revenue received by the state government from mining royalties is used to fund school upgrades, hospitals, roads and services across the state.

“We are seeing revenue from mining royalties being put to good use locally with the upgrade of Wyong Hospital, upgrades to local roads and new schools,” he said.
“The NSW Government is committed to mining related communities through Resources for Regions.

“This great program delivers improvements to local infrastructure such as road and rail infrastructure, water and sewerage systems and social infrastructure.”
One of development consent conditions issued by the government states that there must be a commitment to employing 70 percent of its workforce, including 10 percent indigenous employees, from the local region.

Wallarah 2 Project Manager, Ken Barry, said it was anticipated that they could be on first coal by late 2022 to early 2023, and recruitment for a mining workforce was likely to begin in the 12 months leading up to that.
“Recruitment for positions will be undertaken by the various contractors and will a local employment contingent,” he said.
“Wyong Coal has a commitment to 70 percent local employment from southern Lake Macquarie and the Central Coast.
“The mine will employ over 300 workers, plus various management and statutory positions.
“Specialists and management staff will be employed to meet internal
technical requirements over the coming period leading through construction into mining operations,” he said.

Wallarah 2 has been criticised by Central Coast community groups, such as the Australian Coal Alliance (ACA), for its potential impacts to the region’s catchment river systems.
The NSW Environmental Defenders Office, on behalf of ACA, filed a case against the NSW Minister for Planning on the basis that legal errors were made in the Planning Assessment Committee’s approval of the mine, but their case was dismissed by the NSW Land and Environment Court in March.

Environmental group, Lock the Gate Alliance, has long been opposed to the mine and expressed its concern about the approval on Facebook, calling the government “goofballs” for making the decision.

The NSW Minerals Council CEO, Stephen Galilee, said Wallarah 2 has been “one of the most scrutinised mining projects in NSW history, subjected to repeated assessment over a ridiculous 16-year period, including by independent scientific experts, the Department of Planning, and the Independent Planning Commission, before receiving a positive determination last year”.

Development Consent was granted in January, 2018, with a long list of conditions to be met, even before any digging can start.

Some of the more significant conditions include: the approval is valid until January 16, 2046, and then Kores is required to rehabilitate the site; only five million tonnes of ROM (run-of-mine) coal can be extracted per calendar year and all to be transported from site by rail; the mine can operate continuously and an air pollutant monitoring station must operate at all times; preparation and implementation of a frog research program into threatened frog species in the area and allocate $167,545 to this program over a four year period; establishment of a community consultative committee; and, annual review of environmental performance to the Department and independent environmental audits 12 months after starting and then every three years.