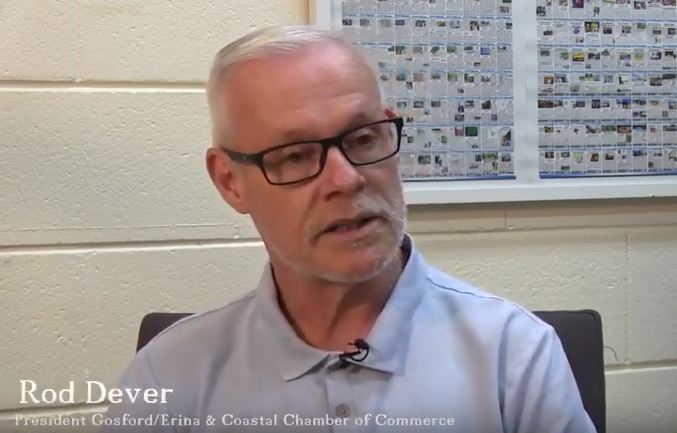 Gosford has been “planned to death” but confidence is finally returning, as projects get underway in the city centre, according to Gosford, Erina and Coastal Chamber of Commerce President, Rod Dever.

Dever said the city was on the verge of “very exciting” times. “People are finally putting money into projects to make things happen,” he said. “Confidence is creeping back in the business sector but we really need to keep up the momentum and community consultation.”

Dever said looking at infrastructure was vital, as development plans for Gosford went ahead. “We need to take a good look at our roads and traffic management,” he said. “We also have to look at connectivity.to help make Gosford the jewel in the crown it should be. “Despite the work which has been done on the F1 in recent years, there is still that bottleneck at Wahroonga.

“We need to look at other forms of connectivity, which is why a ferry service to Sydney is such a good idea.” Dever said confidence in the business community was reflected by increasing membership numbers at theChamber. “We are seeing new members every week and we are also in touch with businesss in Sydney looking to relocate to the Coast,” he said. There is also a growing unity between the various Chambers of Commerce in the region. “There is an advantage to ‘hunting in a pack’ when it comes to specific issues with areas of crossover.”