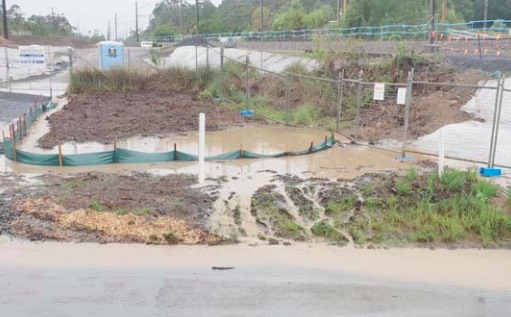 Recent run-off into creeks around the maintenance facility development site

According to the Australian Rainfall and Runoff (AR&R), and the Ourimbah Creek Catchment Flood Study, completed in October, 2013, by Catchment Simulations Solutions, the February, 1992, storm event was the largest noted, and recorded as being between a 50- and a 100-year Average Rainfall Interval (ARI) event, TfNSW has informed residents. The 2007 (Pasha Bulker) storm was approximately a 20-year ARI event.

“It should be noted that the ARI event relates to rainfall and does not directly relate to the wind/ swell events that may have been associated,” a TfNSW statement said. The statement confirmed that its flood study for the site considered the entire catchment area including areas downstream from the facility. Residents asked TfNSW to identify the principal points of stormwater discharge when the facility water detention pond is full, and whether excess water would go into Chittaway Creek or north of the facility? “The water will be pumped from the water detention basin into existing waterways to follow the natural drainage path,” the statement said.

“For Basin 2, the water will be pumped next to the spillway into the existing culvert at the un-named creek next to Turpentine Rd. “For Basin 1, the discharge is into a spillway into a new channel, which discharges to an existing open channel next to the main north rail line. “Overflow from the water detention basins will also discharge to the same locations. The pumps in the water detention basins will be powered primarily by the Sydney Trains power supply. “The Sydney Trains supply is considered a duplicate point of supply, as it is fed from two different locations in the Sydney Trains network. “As a backup, there is generator connection point located in the front of the maintenance facility building to address a critical Sydney Trains Substation power failure.

The flood model was received from Council in January. Since then, John Holland and consultants have checked the model and continued to incorporate the earthworks and other facility areas into the model. “These design elements are yet to be finalised, although they are fairly advanced. “Once the hardstand design is finalised, the model will be updated and finalised. “The base design flood model is issued by Central Coast Council to ensure that consistent catchment modelling and rainfall data is used. John Holland verified the model and updated it to reflect the project works. Central Coast Council will validate the updated flood model on receipt from John Holland.

Gas leak at a private residence in Kangy Angy

The running sore is still running