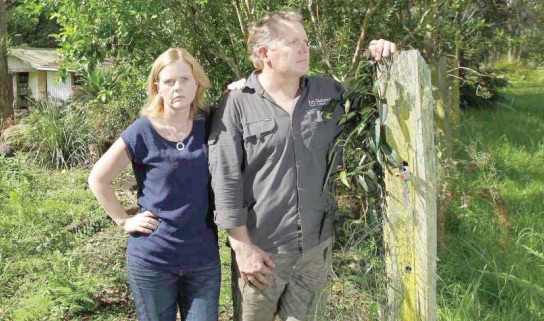 Kangy Angy Residents’ Action Group member, Michelle Nicholson, is fed up with broken promises and poor planning by Transport for NSW and associates

Due to poor planning and lack of foresight by Transport for NSW (TFNSW) and TFNSW Contractor, John Holland, further removal of melaleuca biconvexa, that provide habitat to the critically endangered Swift Parrot and Regent Honey Eater, will soon begin at the Train Maintenance Facility project site at Kangy Angy.

On November 15, Kangy Angy Residents Action Group member, Michelle Nicholson, met with Holland’s Community Liaison Officer and a TFNSW Representative. At this meeting, Nicholson, who’s acreage property is landlocked by the 24/7 heavy industrial facility, and now shares a property boundary with Transport NSW, was advised that the mature trees and melaleuca biconvexa that screens the Nicholson’s backyard from the facility and the newly erected high voltage power lines, will be removed due to an engineering error made by Holland.

“Central Coast Council recently approved the Section 138 application for the access road crossing, and at this meeting, I was told by John Holland that the road will be 2m above ground level and require a batter either side, which means that the promised vegetation buffer will be cleared,” Nicholson said. “I sought further clarification regarding the height of the road and John Holland later confirmed that an engineer gave misinformation, and the road would only be 1.3m above ground level at the highest point, but the trees still need to be removed.

“At the time of the meeting, John Holland was unable to provide any specific detail regarding the engineering of the road, placement of culverts, or how excess water will be directed away from my property,” Nicholson said. “There is no storm water connected in our area, and during times of heavy rain, the excess water will run off the batter and flood onto our property. “We do not have sewer connected and rely on our absorption septic system, any excess water onto absorption trenches will inhibit its effectiveness and increase the risk of effluent floating to the surface of our backyard, where our three children play,” she added.

After receiving the news that the former Wyong Council had put forward the neighbouring Council land for this heavy industrial project, Nicholson said TFNSW refused to offer voluntary acquisition of her property and also advised her that her family were not entitled to any form of compensation for loss of property value from the impact of the heavy industrial facility being built next to their acreage home. “Our only comfort was that TFNSW made verbal promises that a minimum 10m vegetation buffer zone would be retained to provide screening for the backyard,” she said.

“Flood maps provided to residents at a recent meeting with TFNSW and John Holland clearly show that this area of land is fl ood free, so residents are bewildered why the trees now need to be cleared. “After back flipping on their promise to connect residents to town water and sewer and making no improvements to the residential area surrounding the facility, it is clear that TFNSW are only concerned about the land within their project boundary,” Nicholson said.