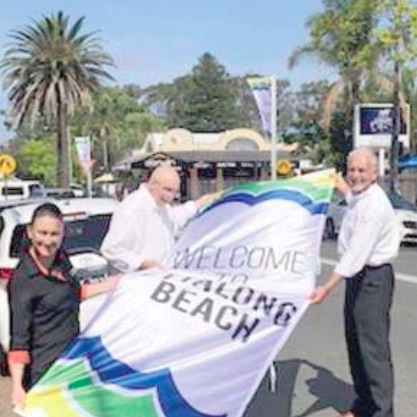 Peninsula Tourism Partners have designed street flags for Ettalong Beach as part of the group’s ongoing activities to “bring Ettalong back to life”.

“Peninsula Tourism Partners Incorporated is a group of people who are passionate about working with local business to improve tourism in our region,” said group president Ms Kim Cole. “Our organisation has many projects in the works and this is the next initiative after Red Carpet Day,” Ms Cole said. “Our team has kept this project a secret to surprise all of the Ettalong businesses and the community. “It will be a welcomed surprise to the struggling businesses in Ettalong Beach, especially since the ferry diversion.

“We class Ettalong as a tourist destination so the flags will give the place an identity as well as putting some colour in the street. “Most major tourist destinations have something, like street flags, to welcome people, to make them think something is happening here,” she said. Ms Cole said the eight “Welcome to Ettalong Beach” flags were being installed along Ocean View Rd on Wednesday, October 31.

“The flags which are three metres long by one metre wide and will be hung from the eight already existing flag poles that have not had flags hanging from them for many years and will add to the beautification of Ettalong Beach,” she said. The flags were designed by members of the group, according to Ms Cole, who said the three waves and three colours used represented “our beautiful waters (blue), the Brisbane Water and Bouddi National Parks (green) and our beaches (yellow)”. The cost of the flags was covered by Ettalong Diggers Memorial Club along with a contribution of $500 from Member for Gosford Ms Liesl Tesch.

“We wanted to show the local businesses that there was someone who did care about Ettalong,” Ms Tesch said. Ms Cole said she was asked daily about the status of the dredging. “I was disappointed this morning to see such a beautiful day and the dredge is still anchored on its mooring. “We have been told there is still one section of the channel that needs work and they are aiming to have the ferries back by the end of November but not much is being said, so you know as much as I do.”