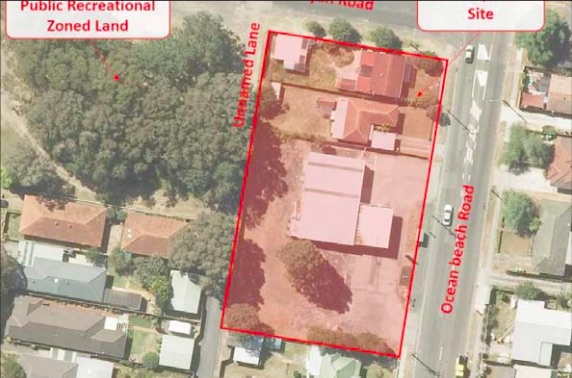 United Petroleum has asked Central Coast Council to amend its consent for its new $2.2 million service station to be built at 303 to 313 Ocean Beach Road Umina.

But it still believes it could be operating by the end of January. This is the second time United has applied for its original proposal to be amended. The fi rst was lodged in September 2017 to widen the canopy, reconfigure parking and reduce the tenancies from three to two. This time it is applying to remove the car wash that was included in the original 2016 proposal.

United now also wishes to remove another tenancy from its plans, reducing the number of shops to one, and to increase the landscaped area on the site. United Petroleum’s chief operating officer Mr David Szymchzak said the decision to remove a further tenancy and the car wash was based on demand. As for when construction was due to commence, Mr Szymchzak said: “There should be mobilisation on the site in the next little while. “With Christmas approaching, it will probably be open for business by the end of January or February,” he said.

He said he was aware of the lack of price competition for petrol on the Peninsula and was “absolutely” convinced United would be offering a cheaper alternative on Ocean Beach Rd. “United always brings cheaper petrol to an area when it commences operation and we are hoping to excite some very competitive pricing in the areas.” “We have decided to redevelop the site into a large convenience store and Pie Face outlet,” he said. According to the Council’s online development tracker, deferred commencement consent was granted on December 23 two years ago and operative commencement was issued on February 1 last year.

A construction certificate was granted for the project in February, allowing construction to go ahead. The project included demolition of the existing self-serve service station and two existing houses. The new service station, yet to be built, will include four doublesided refuelling bays and the canopy and an ancillary service store. According to an assessment report prepared by Council staff, the service station will operate 24 hours a day and seven days a week. The convenience store will operate the same hours and will employ two staff. The fi rst time the proposal was amended, the canopy was widened for better weather protection.

Internal layout was modified to include additional food self service areas for the sale of Pie Face products. The location and layout of storage, office and toilet facilities were changed and plans were included to provide tables and chairs for customers along with internal access to a secondary tenancy and centrally located toilets. At the time Council concluded that the modifi cations did not result in any intensification of the use of the site.

“The changes to the internal layout of the convenience store to include additional food preparation areas for the sale of Pie Face food products and a large area to locate tables and chairs for customers will not result in separate operation as a restaurant (food and drink premises),” the assessment report said. “Pie Face is exclusively owned and operated by United Petroleum and is not based on a franchise business model,” the report said. “The pies are prepared off site and sold within the convenience store.

“The inclusion of Pie Face does not change the status of the convenience store. It continues to function as an ancillary and subservient use. “The availability of tables and chairs are merely for the convenience of customers.” No information has been made available on Central Coast Council’s Gosford development tracker about the detail of the latest proposed amendments to the project.