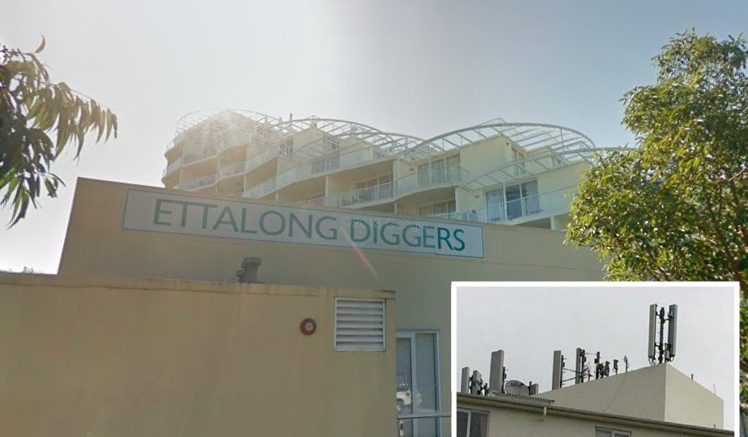 The strata committee representing unit owners in the resort section of the Ettalong Diggers complex have commenced legal action against the club.

Mantra Building strata committee chair Mr Barry Sale said the legal action was related to damage, caused to units and common property, from leaks in the roof on the eighth floor.

Mr Sale said the leaks were caused by three telecommunication companies – Telstra, Optus and Vodafone – drilling through the waterproof membrane on the roof to anchor at least 20 radio frequency transmission devices located on the roof of the building.

Ettalong Diggers Memorial Club chief Mr Bill Jackson said the club was just as anxious as the unit owners to seek a solution to the ongoing leaks. Mr Jackson said unit owners had engaged in legal action over the issue before and some had already received monies from insurance claims. He said there were around 25 devices on the roof but they may not all be operational. He said he believed the total paid by the three telecommunications companies per year was $70,000.

Mr Sale said he noticed the devices when he purchased his unit, which is located on the eighth fl oor and has incurred water damage but said, at the time of purchase, he did not take much notice. “The situation was that the club built the building and then operated the club in one section of it and sold off the hotel part of it so that the club had a base and the bulk of the cost would be met by selling off the units,” Mr Sale said. “One of the things the club claimed ownership of was the two service towers on the roof,” he said.

The reason they kept ownership of those towers was because they were able to sell spaces on those towers to the telecommunications companies. “The club owns the towers but for the telcos to use those towers they needed to drill into our part of the building in order to anchor their towers. “There was never any arrangement or understanding of the strata owners or holders as to any agreement with the telecommunication companies. “Our permission never sought and never given. “By them drilling into the roof of the building, they drilled through the waterproof membrane. “They punctured the membrane and consequently every time it rains it leaks and it is still happening.

“This fight has been going on for around about nine years. “It is not just water getting in because in those two towers is a huge number of pigeons both dead and alive. “The water leaking through the roof is yellow. “In two cases the water is dripping in the kitchen areas of two of the units.” Mr Sale said he had attempted to resolve the issue directly with the telecommunications companies but had no success. “Strata had to arrange for collection trays at our cost to be put into the ceilings, then from the collection trays the water was piped down into buckets into the units affected. “We have had to pay for mould removal.” Mr Sale said Diggers chief Mr Jackson had attempted to work with the strata committee to resolve the problem.

“The club has applied to Council to put a cover over the towers which was approved but has now gone back to Council because the telecommunications companies have required other restrictions. “Nobody seems to be able to move these telcos to get the job done they just keep stalling.” Mr Sale said the unit owners were also aware of the health issues associated with electromagnetic fi elds surrounding the devices on the roof of the building. “That issue is a very difficult one to prove and the telcos will tell you the rays go outwards and not down and therefore the eighth floor is not affected,” Mr Sale said. “I believe there is a safety issue there.

“Interestingly enough I wanted to go up and inspect the pigeon poo but I have a pace maker and I was told under no circumstances was I to go up to that level.” The Strata Committee has now decided to initiate legal action against the club. “We cannot have legal action against the telcos because we have no agreement with the telcos, even though they drilled into our roof, but we do have an issue with the club because the club is responsible for our roof being damaged,” Mr Sale said. “We had a memorandum of understanding from the club that it would definitely be fixed by June 30 this year.

“The club signed off on that and we signed off on that and we were paid out by the insurance company for loss of rent up to that period.” Mr Jackson confirmed Ettalong Diggers was resubmitting its application to Council to cover the towers. “The issue needs to be rectified so legal action is probably the best thing the stata committee could do. “The complexity of the whole arrangement makes it difficult to resolve; the club owns two plant rooms up there but not the roof. “Under the towers are two concrete slabs six inches deep but the club only owns the top inch,” he said.

This article appeared first in the print edition no. 457 of The Peninsula News