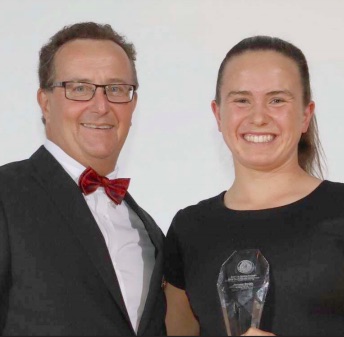 Jemma was named the Surf Sports Youth Athlete of the Year Award for the third time at the Art Gallery of NSW on October 27. Some of her highlights over the past 12 months included trips to Japan and New Zealand as a member of the Australian Lifesaving Team, being named Female Competitor of the Carnival at The Aussies in Perth, and captaining the Central Coast squad at the Interbranch Championships last December.

“Umina has been so supportive of me from the under sixes right through,” said Jemma.

“They’re such a family orientated club and have really supported me and my family right the way through. “They’ve been the foundation of where I’ve come from and what I’ve achieved today,” Smith said. In addition to her outstanding lifesaving achievements, Smith is also a national representative in the kayaking world having had the opportunity to travel to Europe and compete at a high level in Australia.