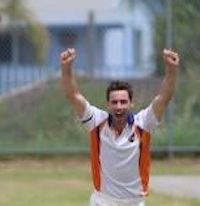 It was a case of the old and the new for The Entrance as they claimed sole position at the top of the leader board, after defeating TerrigalMatcham by two wickets at Duffy’s Rd. Former captain, Jason Blackwood, turned back time with the ball for the reigning premiers as his 3/31 off 10 overs helped restrict the home side to 7/187 from their 50 overs. Skipper, Tim Bowring, was the pick of the Bellbirds’ bats with 41, whilst opener, Lloyd Radcliffe, backed up his last start half century with another 38. In reply, The Entrance were struggling at 7/141 before veteran, Ash Hardy, used all his experience to guide his side to a last over victory. Hardy fi nished unbeaten on 55, with youngster, Callum Dunkerley, elevated to opener in the absence of, Adam Taylor, scoring a well compiled 40, whilst, Mitchell Starkey, combined for an invaluable 41 run eight wicket partnership with Hardy. Jaime Brien was a standout with the ball for TerrigalMatcham, finishing with 4/32. Northern Power moved into second position on the ladder following a thrilling one wicket win over Kincumber-Avoca at Erina Oval. Chasing the home side’s imposing 249 run total, the Power put on 40 runs for the last two wickets, to get home with just one wicket remaining. Nathan Stokes was the hero for Northern Power, scoring 41 not out batting at number 9, Josh Abel, scored 39, and opener, Jeremy O’Connell, hit 34 runs to go with the 3/23 he took with the ball.

After starring with the ball last week, Bryce Birks, excelled with the bat this week for Kincumber-Avoca, bludgeoning 63 runs off 56 balls, including 4 sixes. Keeper, Nathan Auslebrook, also passed the half century mark, finishing with 53, as the pair rescued the Griffi ns from a precarious position of 6//116. With the ball, Michael Williams, was a standout, fi nishing with 5/49 off nine overs. A century to Warnervale captain, Simon Keen, was the highlight of his team’s 141 run win over Southern Spirit, at Col Gooley Oval. The victory saw Warnervale move into third position, whilst Southern Spirit are still yet to record their fi rst win of the season. Keen’s 103, along with support from, Scott Atkinson, 41, enabled the Wildcats to finish with 238 before dismissing Southern Spirit for 97. Joseph Liddle, 4/23, and, Karan Katli, 3/11, were the most successful bowlers. Southern Spirit skipper, Daniel Friend, fought a lonehand for his side, top scoring with 42, after earlier taking 4/49 off his 10 overs. Narara-Wyoming’s, James Smith, destroyed the Brisbane Water batting line up, assisting his side to a seven wicket victory at Adcock Park The off spinner took the amazing fi gures of 6/9, off 8 overs, as the Bluetoungues were dismissed for just 75. Shaun Hill top scored with 23. In reply, Narara-Wyoming, led by, Mark McLachlan, made light work of the run chase, passing the total in the 18th over for the loss of just 3 wickets, 2 of which were run outs. In the fi nal game at Baker Park, Wyong proved too strong for Lisarow-Ourimbah, winning by seven wickets. Winning the toss and batting, Lisarow-Ourimbah stumbled from 2/56 to be all out for 96, before, Jordan Liddle, guided his side to victory, for the loss of just 3 wickets, Liddle finishing unbeaten on 42.