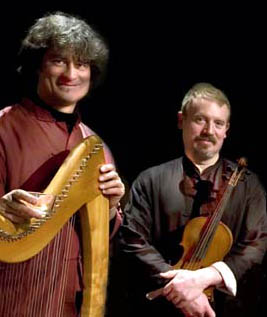 On December 8, the Central Coast community will be visited by, Michael Johnson and Evripides Evripidou, to perform with Coastal A Cappella Chorus.

These men are two of Australia’s most accomplished musicians in their field, Michael on harp and Evri on guitar. Michael, the resident harpist and composer from the Royal Botanical Gardens in Melbourne for the past 20 years, has produced 13 albums inspired by these gardens and his travels, to produce music from folk, jazz to contemporary classical.

Evripides is best known for his virtuosic Jazz licks on the electric bass, playing alongside such artists as James Morrison and Antonio Sanchez. In the ensemble with Michael, he revisits his Greco classical influences, having grown up in Cyprus. Coastal A Cappella is an award-winning local women’s barbershop chorus which gives inspiring performances to many varied audiences at NSW and interstate events.

The genesis of this unusual pairing of ensembles began when, Wende Feeney, a key Chorus member, commissioned Michael to write a commemorative piece for her late son. This led to the composition, Riding the Waves, a piece requiring a fi ve part harmony choir. Wende and Coastal A Cappella were invited to join Michael and Evri as part of their tour, and thus Riding the Waves became the theme of this performance. The performance will be at Erina Community Baptist Church, Erina. on December 8 at 3pm.