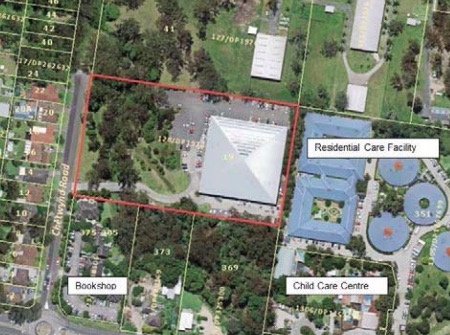 A proposal to include additional uses at the Impact Centre, on Chetwynd Rd, Erina, currently a place of public worship with permitted ancillary uses, has been recommended for refusal by Central Coast Council staff.

The matter is due to be considered by Central Coast Councillors at their next ordinary meeting on Monday, November 12. According to the staff report: “The additional permitted uses will result in an undesirable intensification of uses within an area zoned for Environment Management. “An intensification of uses within the site … would increase risk during flood events,” the report said. “The intended outcome to allow for additional land uses that are currently prohibited is not reflctive of any Local or Regional Planning Strategy and therefore does not satisfy the Strategic Merit Test,” it said.

The staff report said the request to prepare a Planning Proposal did not seek to change the zoning of the site, but to allow for additional uses including a place of public worship, child care centre, recreational facility (indoor), food and drink premises, medical centre and function centre. “The existing children’s play area, gymnasium and café were approved as ancillary uses in DA 22799/97 via a modification to development consent. “The continued operation of these ancillary uses occurs under existing use rights provisions under the EP&A Act, which limits intensification of these uses. “If these land uses were formalised … these uses would be able to expand in area and intensity.

“As such, these uses could dominate the site, without being ancillary to the Place of Public Worship, which is the primary purpose of the current development consent. “The inclusion of these additional uses as permitted uses on the site would further entrench the independence of these uses from the Place of Public Worship and formalise the site as a commercial centre. “Formalising these uses will intensify commercial uses on a site that is zoned for environmental management.” “The report said the additional permitted uses are able to continue under relevant development approvals. “The proposed additional use of a Function Centre and Medical Centre are not currently approved. “A Function Centre would have the potential to generate large amounts of traffic which could result in additional amenity impacts.

“The site is currently constrained by flood affectation and any further intensification of commercial uses on the site would place additional people at risk. “The proposed Function Centre use is not compatible with the surrounding land uses, or environmental characteristics of the land. “Medical Centres are not a permissible use within the E3 zone. “If it were enabled as a permissible use via inclusion in Schedule 1 of GLEP 2014, the use could become the predominant use on the site.” According to Council staff, the subject site has an extensive development history. “A total of 20 DAs have been lodged.” Approval for a ‘place of public worship’ on the subject site was granted by the former Gosford Council in 1998, which also approved the child care centre, café, gym and wellness centre, in 2012, as a Section 96 modification. “The existing café, gymnasium, childcare centre and wellness centre are prohibited under the GLEP 2014, however these uses are permitted to operate under … the EP&A Act relating to existing use rights. “Following complaints received by Council in January, 2017, a review and investigation of the activities and land uses on the subject site was undertaken.

“These complaints indicated that the Wellness Centre on the site was being operated as a Medical Centre, which is a prohibited use in the E3 Environmental Management Zone under the GLEP 2014.” An Order required the Impact Centre to cease operating as a Medical Centre, as it did not have development consent and is not a permissible land use. “On June 13, 2017, Council advised the owner that further action would not be undertaken in relation to the unlawful uses being conducted on site, provided the owner sought an amendment to GLEP 2014. “Access to the site is via a bridge, over a watercourse, from Chetwynd Rd.

“This bridge was constructed as part of a development application for a Place of Public Worship, which was approved in 1998. “A revised fl ood study, prepared in 2012, has been undertaken by Council which shows that the fl ood levels have increased in this location to the extent that the bridge no longer caters for the 1 per cent Annual Exceedance Probability (AEP) fl ood extent, which was Council’s standard at that time. “The fl ood planning area for the creek extends from Chetwynd Rd to include almost half the property.” According to Council staff, it is not permissible to rezone land within the fl ood planning area from an environmental zone to a business zone.