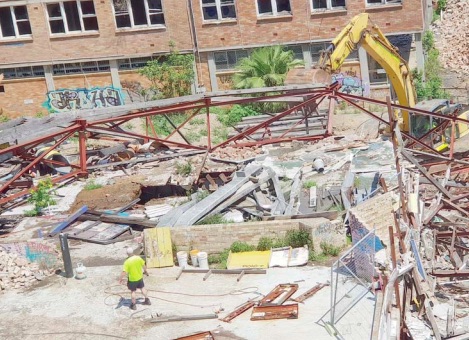 The stalled demolition on the old Froggy's site in Gosford is set to recommence.

Froggy’s has tumbled, and stage 1 of demolition at the Waterside Towers site is expected to be complete before Christmas.

Caine King from CKDS Architecture said stage 1 demolition, to make way for construction of the first of three towers, was “all off and running”. The site had been cleared of asbestos and a technique was in place to remove remaining asbestos known to be contained in the Froggy’s floor. Current demolition does not involve the clock tower of the former Brisbane Water Council building that faces Mann St.

“Part of that demolition will happen during the construction of the fi rst tower,” King said. The tower facing Georgiana Tce was always planned to be the first built, but the site owner is currently examining the pros and cons of all three street frontages, according to King. “Each tower has a benefit for the CBD,” he said. The Mann St tower includes a commercial component as well as residential units. The Georgiana Tce tower includes a tavern and more residential space, and Baker St includes a hotel along with residential units. The developer has approval for 550 units in three towers, with associated parking, commercial and retail space.

“There will be some amendments once we get a builder on board,” King said. “The next stage will be dependent on what the market is up to, what the market is demanding. “Conversations are also happening with Council and the Department of Planning about activating the parts of the site we are not using for construction, for parking or other community benefits.” King said he expected the owner to be back on site at the conclusion of demolition and was hoping to organise a planning meeting to move ahead with plans for construction in January, 2019.

Assaulted man has died in hospital

Business Awards open to all businesses