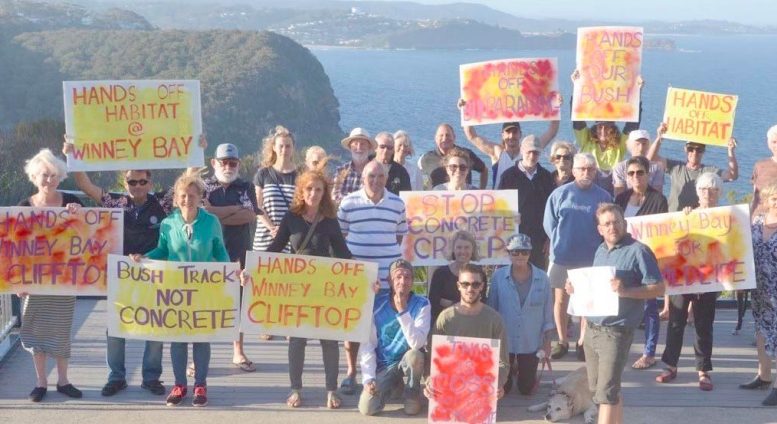 The Central Coast branch of the Australian Conservation Foundation (ACFCC) has called for Central Coast Council to redirect the $4.6m received for 5 Lands Masterplan works at Winney Bay.

ACFCC, in its submission to Council regarding the masterplan, said Council needed to redirect funding from the proposed “metal bridge to nowhere, and utilise the funding for the sustainable management of this public reserve”. ACFCC President, Mark Ellis, said the money should be used for “safe natural paths, not concrete. “Engage professional bush regeneration teams to remove the bone-seed and bitou bush that have proliferated on the Winney Bay headland since it was cleared in 2015,” Ellis said.

“Our members are still concerned about the destruction of coastal bushland in relation to the proposed metal bridge to nowhere and the vehicle access and proposed market stalls on the cliff-top of Bulbararing headland, south of Winney Bay (between Copacabana and Avoca Beach),” he said. “Whilst raising these issue in public, we found many people, including the residents of Copacabana and Avoca Beach, were shocked when they saw for themselves the extent of the proposed development. “There had been very little publicity to date about the proposal and the impacts on the natural environment.

“Of the hundreds of signatures we received on a petition to save Winney Bay, many people have expressed their disappointment with the excessively wide areas of the concrete pathways and the surrounding area that resulted in many tree removals. “The trees were removed even though the ecologist report identified them as having hollows for native fauna habitat.” Ellis said ACFCC was concerned about the integrity of the ongoing process to build more concrete paths that may encroach on the Endangered Ecological Communities (EEC) identified in a 2011 report. “The previous suggestion of market stalls and vehicle access is not consistent with a bush land setting on this stage of the walk,” he said.

“The Gosford area has been blessed by protecting these areas in the past, with ridge lines and horizons being preserved with Coastal Open Space System (COSS) land. “To remove vegetation, and concrete this area for vehicular access, would be extremely disappointing for both residents and visitors. “The native flora and fauna of this area is one of the many reasons that attracts so many visitors to the region, and it should be protected not destroyed. “The current public exhibition doesn’t address the issues we have raised previously and still promotes the additional extended lookout and bridge to nowhere,” Ellis said.

Asbestos management policy to be placed on public exhibition

Victims of domestic violence encouraged to speak out