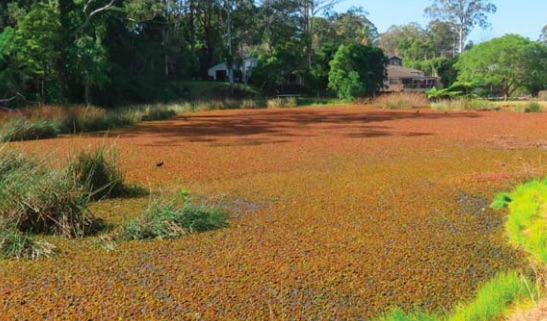 The Springfield Pond Wetland after the storms of 2015 (archive)

The Springfield Pond Wetland is being over-run with weeds and infested with mosquitos. Springfield residents have taken their campaign to repair a wetland pond overrun by noxious weeds to Central Coast Council.

Residents said the infestation completely covered the pond, which had previously been used as a water source for fi re fi ghting, and was causing wallabies and ducks to become entangled and drown. They said they feared that if Council continued to neglect Springfield Pond Wetland, a child could be next to drown in the weeds. According to Glenys Ray, a Springfi eld resident who addressed the September 10 Council meeting, Council had been promising to fi x the dangerous wetland since the storms of 2015, but little had been achieved. “We all feel we’ve been patient and we just want more to be done,” Ray said. Salvinia Molesta is the main noxious weed harming the wetland, which residents fear will spread to neighbouring areas.

“One of the really worrying risks with Salvinia is that it looks like solid land and so children and animals judge it to be safe to walk on,” she said. “We have witnessed ducklings and wallabies thrashing around in the muddy quagmire trying to free themselves.” In early 2017, Council released salvinia weevils into the pond, a biological control for the salvinia, which they estimated would take three years to work. Ray and 25 other Springfi eld residents have called upon Council to apply for an environmental grant in the hopes of a quicker solution. “More money could provide more options,” Ray said. Terry Mealor, Director of Aquatic Technologies, said stopping salvinia had to be a multi-pronged attack. He suggested a strategy of complete elimination involving aquatic herbicide, mechanical harvesting, spot treating as well as the salvinia weevil.

“You don’t just put all your eggs in one basket. “Weevils are only helpful after the bulk of the weed is killed,” he added. At the September 10 meeting, after considerable debate and consideration of several amendments, Council resolved to remove suffi cient weed to install booms, investigate mechanical means of weed removal and investigate the availability of Federal and State grants.

The debate about the Springfi eld pond raised the issue that the former Wyong and Gosford Councils both had a noxious weed offi cer, but Central Coast Council had one offi cer for the whole area. Deputy Mayor, Chris Holstein, attempted to incorporate the need to review Council’s resources into the motion, but failed to do so. An earlier Council media statement referring to the matter said there were “a number of complexities” in controlling the weed, including partial private ownership and the risk of water contamination from chemical weed killers. At the Council meeting, Glenys Ray said the weed infestation was an “environmental disaster”.

She said Salvinia Molesta was a weed of national significance, that doubles in volume every two to three days. “The whole pond is covered with Salvinia, bank to bank, so the only way to keep doubling in size is to get thicker and thicker.” The residents proposed a three-pronged attack to kill the weed and restore the health of the pond, including mechanical or chemical thinning, installation of a boom to keep a portion of the water free, and then the weevil. Ray said a boom had been made available, but Council would need to retrieve it from Tamworth. “Residents would like to know what funds were made available to Gosford Council at the time of the subdivision.” A copy of the Review of Environmental Factors has been promised to residents several times, “but no copy has been provided.

“This pond was used for helicopter bucketing in the Rumbalara Reserve fi res 20 years ago, but it is now only 50cm deep at the weir point and infested with Mosquitos,” she said. According to Glenys Ray, Member for Terrigal, Adam Crouch, had informed the residents that Council could apply for grants via the Office of Environment and Heritage. Councillors, Jeff Sunstrom and Rebecca Gale Collins, said that they had both visited the site. “The community is devastated by what was happening, Springfi eld mosquitos are now in plague proportion,” Ray said.

Council officer, Brett Shearar, said Council had one noxious weed officer for the whole Local Government Area and that the Department of Primary Industries would not “fund a number of weeds because they are so widespread”. “I think the bigger picture is that we do not have the resources to tackle this, and the government needs to come to the party,” said Clr Greg Best. “This state government has $3.9bn in its coffers and it is going to spend a lot in the next election because it has not got a lot of friends.”