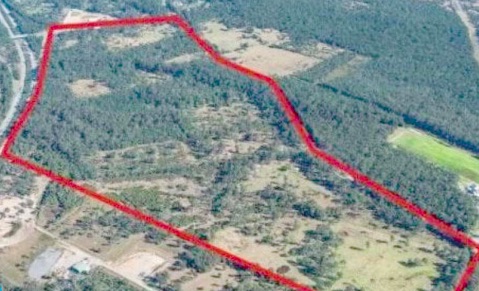 It is now two years since expressions of interest were called to purchase the 88 hectare Warner Business Park, at Kiar Ridge, once the former Wyong Council’s preferred site for a regional airport.

Central Coast Council’s offi cial response to the status of the land was “no comment” on confi dential matters. Independent Councillor, Bruce McLachlan, said he understood that the site had been listed for sale. “Councillors have been advised of some possible buyer interest, however details have not been advised of fi nal outcomes,” McLachlan said. “The Council has now negotiated easements with the RTA to allow services to be run under the freeway, and this has greatly enhanced the viability of the site, and value,” he said.

“The Regional Plan acknowledges our high unemployment rate, and the site should be used for employment generating industry. “But calls for major warehouse distribution should be cautioned. “Many are now the so called automated ‘black warehouses’, that run 24 hours with no large scale workforce,” he said. Another independent Central Coast Councillor, Louise Greenaway, has been asking questions about the status of a development application for the Kiar Ridge land. Clr Greenaway sent copies of her latest correspondence to the Councillor Support Team, to the Wyong Regional Chronicle. According to the email, Clr Greenaway sought clarifi cation regarding the physical commencement on works on the land, from Council staff, in February and, as of September 17, she had not received a response.

“The existence or otherwise of a DA, impacts on the likely outcomes of the Expression of Interest and what I think should, or can, be done with the land,” her email to Councillor Support said. “What is the engineering and survey work that has been done?” She also asked who the work had been done by, what works had been undertaken and what monies paid. Clr Greenaway asked Councillor Support for confi rmation that the work related to an approved development, and for the dates that the engineering and survey work was done.

“If you consider any or all of the requests to be ‘operational’ or ‘commercial in confidence’, please advise,” her email said. “As always, it is neither my desire or intention to breach codes, but merely fulfi l my obligations and responsibilities as a Councillor. “In case you are not aware, there is a perception in the community that Council is not being transparent in relation to these matters, which relate to the management of a signifi cant public asset. “In my view, it is important to demonstrate that we are providing all appropriate information in a timely manner,” she said.