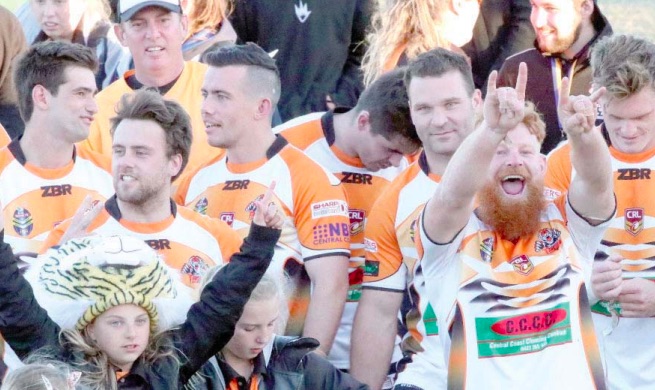 The Entrance Tigers are the 2018 Central Coast first grade Premiers, having outlasted the Wyong Roos 30-24, in a thrilling grand final, played at the Woy Woy Oval.

The Coast’s two powerhouse clubs dominated the local competition during the winter months, with the second placed Roos finishing one point behind the Tigers, and a full 10 points clear of the third placed Roosters, on the competition ladder. The much anticipated showdown for this season’s silverware saw Wyong jump out of the blocks quickly, with tries to barnstorming prop, Wyatt Shaw, and left winger, Mitch Nakhoul, which gave the Roos an early 10 point lead. The advantage could have been greater had try scoring opportunities not been frittered away when dummy half, Alex Langbridge, was penalised on two separate occasions for ducking in behind his lead runner close to the Tigers’ line.

The Entrance was struggling to get out of their half until the introduction of supersubs, Jay Florimo and Tim Nawaqatabu, suddenly sparked them into life. A grubber kick and regather by half, Sione Tonga, had the Tigers on the scoreboard, and tries followed to, Will Pearsall and Grant Nelson, with the seaside club taking a meaningful 18-10 halftime lead into the sheds. The second stanza began equally as brightly for The Entrance, and three minutes after the resumption, young backrower, Jacob McCudden, finished off some spectacular hot-potato football, to score in the tennis court corner. Skipper, Matt Killick, converted from out wide, and the Tigers looked well on their way to claiming the Premiership. Wyong weren’t done with yet, however, and they struck twice on the left edge, via centre, Isaiah Cooper-Tetevano, to reduce the deficit to just four, with a quarter of an hour to play.

A last tackle bomb hoisted into the sunny corner by Man of the Match, Will Pearsall, would ultimately prove to be the game breaker. Peering directly into the setting sun, it was fumbled by Nakhoul, allowing, Mao Uta, to swoop for the Tigers. Killick kicked his fifth conversion of the afternoon and the lead was extended to 10. A last gasp flutter of hope was afforded Wyong fans when, with three minutes left on the clock, the Roos conjured yet another try in their favourite left-hand corner; this time notched by former Woy Woy player, Greg Wisham. A final Wyong attacking set was weathered by the scrambling Tiger’s defence, and the fulltime siren rang out to great scenes of jubilation amongst the orangey throng.

The Bateau Bay based club had secured their 14th First Grade Premiership, which pushed them one ahead of their grand final opponents in the overall, post 1947, tally. In a big day of local rugby league, the earlier deciders saw: The Entrance defeat Wyong 34-14 in Reserve Grade; Woy Woy came from behind to edge out Erina 12-7 in the Open Grade; Wyong overcame Erina 22-2 in the Under 19’s; while The Entrance were too good for Terrigal in the Ladies League Tag, winning the early morning grand final, 26-10.