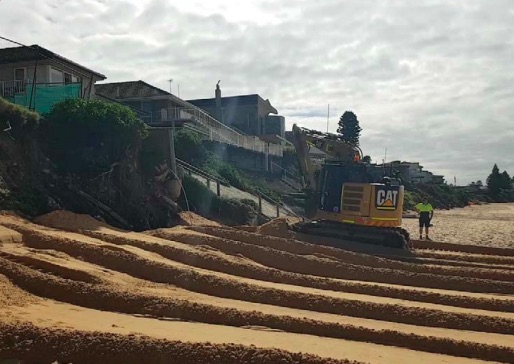 Pat Aiken, Secretary of the Coastal Residents Association, has written to the CEO of Central Coast Council, Gary Murphy, about the Council’s ongoing failure to remove asbestos from public land at Wamberal.

“On Friday, September 7, I received a letter from Central Coast Council [setting] out a number of concerns related to my recent extraction of asbestos containing materials from a section of the Wamberal Beach dune escarpment,” Aiken’s letter to Murphy said. Council’s letter to Aiken threatened a penalty should he continue to dig in an “affected area”, or remove, relocate or bring any further material onto the beach dunes or embankment.

The letter to Aiken indicated that Council was well aware of the risks associated with the ongoing presence of Asbestos Containing Material (ACM) in the location regularly identified by Aiken, since June, 2016, even though Council had repeatedly made public statements downplaying the public risk posed by the presence of the Asbestos. “Your actions in extracting potential ACM from areas of the beach and embankment increases the risk to you and others,” Council’s letter to Aiken said. “Council is developing an action plan to make the area safe for all residents and beach users,” the letter went on to say. “Your recent actions in exposing the subject materials and engaging Council Officers and consultants has delayed the required testing and the development of the action plan. 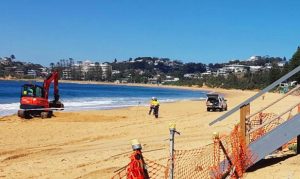 Council carrying out tests on Wamberal Beach for ACM, August 28, 2018

“The Protection of the Environment Operations Act 1997 establishes certain offences for transport, handling and disposal of asbestos waste.” The letter then instructs Aiken not to carry out any further digging in the area of the beach, dunes and embankment where such material is or may be located (affected area), and not to relocate or remove any material within the affected area. Aiken was told not to bring any further material onto the beach, dunes or embankment and warned that if activities constituting an offence under the Protection of the Environment Operations Act 1997 were “observed in future, the Council may take further regulatory action, including issue of penalty infringement notices or commencement of court proceedings”. “I would like to make it clear that I have never brought any ACM onto the beach, as Council’s letter to me asserts,” Aiken’s letter to Murphy said. “Any ACM that has been in my possession while on Wamberal Beach is from a legacy dumping uncovered by a storm in June, 2016, and then buried by Central Coast Council on Wamberal Beach on June 22, 2017,” Aiken’s letter said.

Aiken’s letter to Murphy pointed out that the threat of penalties because of Council’s concern for the risk to Aiken and to others “should be of great concern” to the CEO. “When I displayed ACM to Council officers and consultants that I had taken from another section of the public beach, it was my intention to demonstrate that there was a large concentration of ACM nearby on public land. “This was the legacy dumping of ACM which Council buried on June 22, 2017. “I had intended to return those samples to the location where I had found them, but Council officers demanded that I put them down so that they could be sprayed and bagged.” The ACM came from part of the beach that was public land and subject to coastal erosion. Aiken’s letter to Murphy included images showing the concentration of ACM on public land. “The ACM buried by Council … is still in place on public land, and was left in an exposed state by Council for over eight months,” Aiken said.

“Council admitted to the Environmental Protection Authority (EPA) in April, 2017, that this ACM was on public land and promised to remove it. “Instead, it was reburied by Council, contrary to recommendations made to Council in the July, 2016, Wamberal Beach Storm Erosion Remediation Report. “Council has regularly made statements that Wamberal Beach is safe and that because the ACM on the beach is bonded asbestos, it is low risk. “Calls for the beach to be closed have been dismissed by Council because of Council’s assertion that there is a low level of risk. “There is no signage on Wamberal or Terrigal Beach indicating that there are concentrations of ACM in affected areas. “The affected areas referred to in Council’s letter to me, are not identified with signage. “Now that I am aware of Council’s new concern of a higher level of risk to myself and others when buried ACM becomes exposed, I will no longer handle exposed ACM that I locate on Wamberal Beach or Terrigal Beach.

“However, I also believe that it is now incumbent on Council, as an authority under the Protection of the Environment (Operations) Act, to properly warn other residents of the Central Coast of the heightened level of risk from ACM found on Wamberal Beach or Terrigal Beach.

“Council should now also ensure that all residents and users of these beaches are advised of: the procedures they should follow if ACM is found; the potential risk to themselves and the public if they expose ACM on the beach; and, the penalties they may be subject to if they remove, relocate or bring any further material onto the beach dunes or embankment. “The warning signs currently attached to barricades along Wamberal Beach should clearly state that the affected areas behind the barricades contain concentrations of Asbestos Containing Material (ACM) and that those materials should not be handled or removed or relocated to other affected areas.

“At this time, there is no such signage to convey this important information to users of the beach. “Council’s letter also suggests that the affected area of the beach is now very extensive and that it has ‘engaged expert consultants, who are currently testing the beach for traces of asbestos…, taking samples of the sand in various locations along the affected area of Wamberal Beach’. “From my observations of the testing operation by Council at Wamberal Beach on Wednesday, August 28, the affected areas extended north from The Ruins, by around 50 metres, and to the south, by at least 100 metres, and 20 metres from the high water mark up to a distance of about eight metres from mesh barricades in front of the dune system.

“Altogether, at least 3,000 square metres of public beach so far. “Considering that ACM has also been found along the beach from Wamberal to Terrigal, Council has a responsibility to fully inform all users of these two beaches of the now heightened level of risk. “Anyone using these beaches should receive the same warning that has been directed to me and I respectfully request that suitable warning signs and barricades be placed along these two beaches to clearly identify those areas of the beach now considered by Council to be potentially affected by ACM contamination.

“I also believe Council has a duty to properly barricade any testing operations and to ensure that appropriate signage is displayed warning any potential onlookers of the work being undertaken and the risk of exposed ACM uncovered during this process. “I would like to thank Council for alerting me personally to the issues. “Council must now fully inform residents and beach users of the heightened level of risk from exposure to ACM on Wamberal and Terrigal Beaches, while also advising of the potential of individual fines up to $250,000 for noncompliance with Council directions related to these issues,” Aiken’s letter to Murphy said. Aiken had not received a response from the CEO as Coast Community News was going to press and Council has been asked for a response to the issues raised in this article.