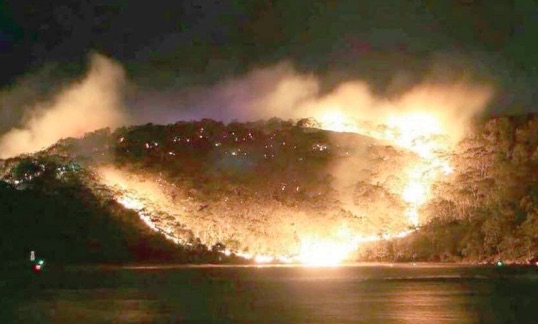 [Report] A bushfire which started on August 15 has destroyed nine hectares of bushland in the Bouddi National Park. A total fire ban had been declared for the Central Coast on the day.

The blaze was reported to NSW Parks and Wildlife Service, NSW Police and the NSW Rural Fire Service just after midday on the Wednesday in bushland near Hawkes Head Dr, Killcare, and High View Rd, Wagstaffe. Containment lines were established to protect nearby properties.

Firefighters, emergency service personnel and volunteers worked throughout the night to bring the blaze under control. The blaze burned uncontrolled for over 24 hours before the Fire Service declared it as being controlled just before 2pm on Thursday, August 16, after waterbombers were deployed. Firefighters and other emergency services remained on site during the day to conduct backburning and to monitor for any flare ups.