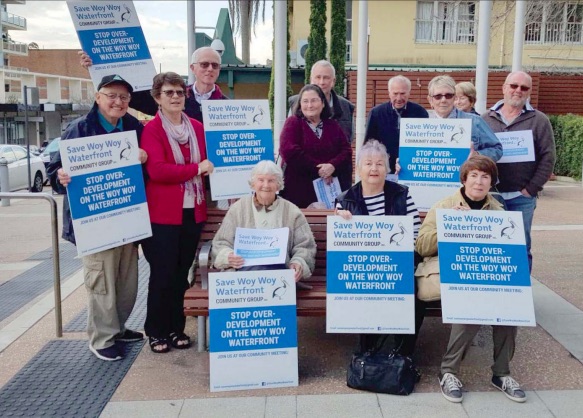 The sole purpose of the meeting, according to Panel chair Mr Jason Perica, was to consider the determination of the one development application for the property at 184-186 Brick Wharf Rd and North Burge Rd, Woy Woy. Mr Perica said the Panel had been provided with all copies of submissions, had received briefings from Central Coast Council staff on two occasions, and undertaken a site visit. Eight individual local residents, two representatives of community groups, and one representative for the developer addressed the Panel at the meeting held in the Gosford Chamber of Central Coast Council.

The Panel adjourned to deliberate in private for around 40 minutes, after hearing the speakers, before returning to inform the public of its unanimous decision to refuse the application. The residents who addressed the panel outlined their objections to the development including loss of privacy and winter sun, inadequate parking and an adverse impact on the popular Lions Park Reserve at the end of North Burge Rd. Several speakers argued that the proposal was not in keeping with the recreational use of the land. Ms June Mitchell of North Burge Rd said the road was the only entry and exit to Lions Park. “More open space is going to be needed, due to population growth, around existing parks, and open space must be cherished and protected for the current and future generations,” Ms Mitchell said. Mr James Waugh said he had never seen Lions Park empty, including the playground, but had never seen the available parking less than one-third full with overflow parking encroaching on North Burge Rd every weekend.

He said Council had spent considerable funds upgrading the two boat ramps and pontoons and it would be irresponsible to undermine that expenditure because of a development with inadequate parking for residents and visitors. Multiple residents and the two community group representatives outlined what they considered to be the most serious problem with the site, described as its location on a floodplain. Speaking on behalf of Save Woy Woy Waterfront, Mr Ross McMurtrie said the flood hazard was the “number one issue raised by our supporters”. “There is one aspect with enormous consequences for future the development of this site and that is sea level rise,” he said. “Projected sea level rise is an overriding reason why seniors accommodation should never be considered at this location,” he said, and illustrated his argument with photographs from a 2015 storm surge and 2017-18 king tides. “The flood hazard is a current reality already sufficient to endanger life in an emergency access situation or evacuation.

“There is one aspect of flood hazard with enormous consequences for the future development of this site and that is sea level rise,” he said. Mr Perica’s announcement that the Panel had unanimously decided to refuse the application was greeted with applause from the public gallery. He said he would not read all the particulars of the Panel’s reasons because they ran for 10 pages but stated the Panel had upheld, with some changes and additions, the 12 reasons put forward in the Central Coast Council staff’s recommendation to refuse the application. In particular, the flood hazard argument for refusal was expanded by the Panel to state the development was not compatible with the tidal inundation of the site and surrounding roads, especially given the sensitive nature of the proposed use of the site for seniors housing. Mr Perica said the determination, along with the video of the public meeting, would be published on the Panel’s website within seven days.