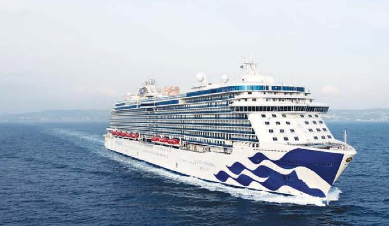 The Travel Hut in Kincumber is promoting the Majestic Princess cruises

[Kincumber] Majestic Princess the newest ship to join the Princess fleet will cruise into Sydney for her inaugural Sydney based cruise season on September 15.

Majestic Princess offers an ambience, unlike any other Princess ship. Offering the entire Princess comforts you’ve come to know and love, as well as many new features, Majestic Princess is the ultimate in premium cruising. Signature favourites like Movies Under the Stars and the Piazza are combined with new culinary delights including two Michelin-star restaurants.

Calling Australia home for more than five months, there are plenty of opportunities to find out what makes this ship so special. You will be able to enjoy unparalleled views of the sea from a dramatic over-the-ocean glass walkway, the SeaWalk® is the first of its kind at sea. At almost 40metres above the waves, it affords thrilling vistas of the ever-changing seascape. If you fancy some time to luxuriate open the door to The Enclave, home to Princess’ largest ever thermal suite and a dramatic hydro-therapy pool with a cascading rain shower and therapeutic air jets. Relax on heated stone beds or soothing water beds, and indulge in Turkish-style steam baths.

Everyone will be amazed as the night sky lights up with a mesmerizing spectacle of water dancing to the sounds of music. While brightly coloured lights illuminate the water, you’ll see a captivating show of waltzes, pirouettes and fountains shooting water up to 10 metres high all choreographed to music. Jeanene, Sonya and Glenn at The Travellers Hut Kincumber have completed the extensive Princess Cruise academy training program certifying them as expert Princess Cruise professionals. Having their three staff members complete 15 hours of training to reach Commodore level The Travellers Hut joins an exclusive group of travel agents who are now recognized by Princess at the Academy’s highest level for their unique qualifications and knowledge as cruise planning professionals Princess also offer a Defence Force benefit program for Veterans & Active and Retired Personnel.

To thank the brave men and women of the Australian, New Zealand, Canadian and United Kingdom Defence Forces for their service, Princess Cruises® offers up to $250 free onboard spending money. This special military benefit is eligible on any cruise, any time of the year. For further information on the military benefits along with exclusive select sailing offers and inclusions available at;

The Travellers Hut contact our Princess Commodores, Jeanene, Sonya or Glenn on 02 4363 1699

Source: This article is categorised as ‘sponsored content’, as it specifically promotes a current local advertiser. We clearly mark such stories so the readers understand the relationship between the advertiser and Central Coast Newspapers.